glue Archives | TinkerLab
You are here: Home / Archives for glue 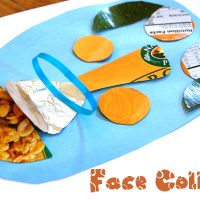 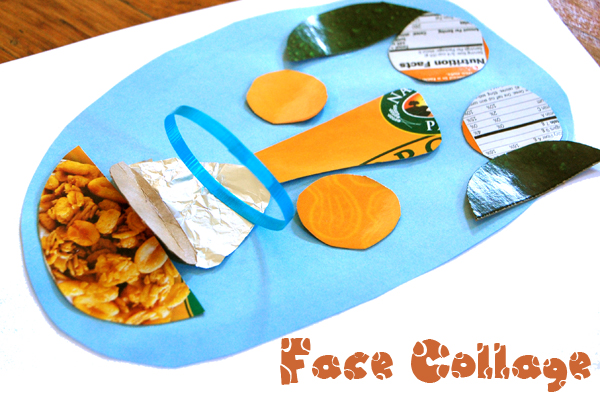 When I was an art teacher, the youngest age group I worked with was Kindergarten so I rarely had the chance to witness a child’s transition from scribbling to representational drawing. My three year old daughter is at the precipice of representational drawing and it’s an exciting place to be, but she can get frustrated that she can’t create what she imagines (which is often!) and frequently asks me to draw things for her. This can be tricky because it goes against my belief that children should find their own way with visual representation and I’m often reluctant to draw things for her.

This project was born from a need to manifest her vision while also matching her abilities, and would be appropriate for children on the verge of creating representational drawings as well as those who draw realistically. Links to information about stages of artistic development at the end of this post. 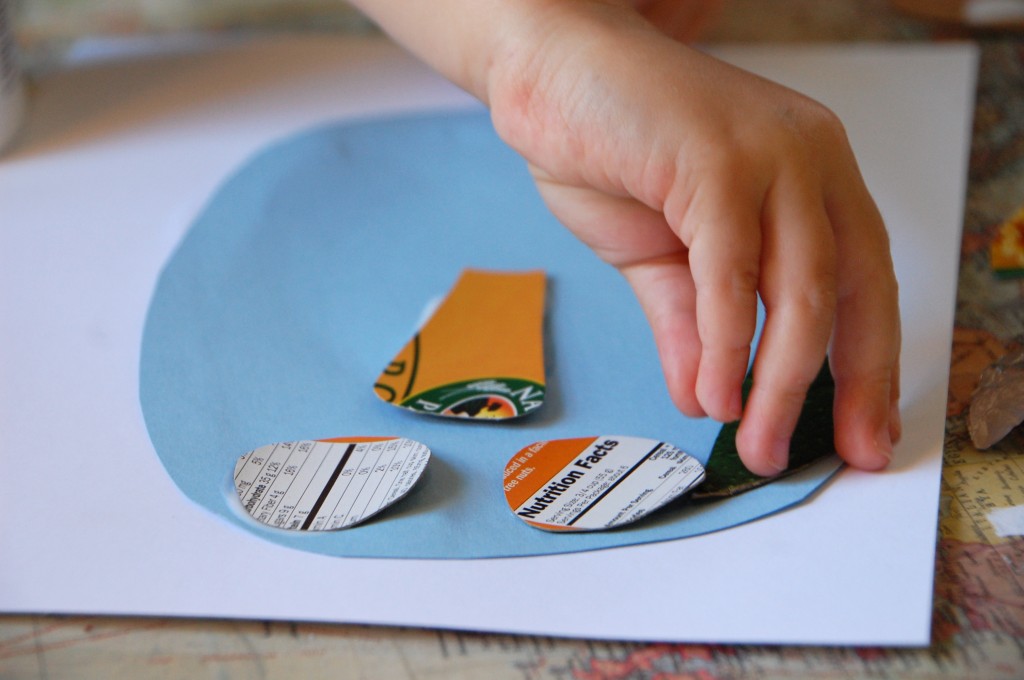 I cut circles, rectangles, half circles, and some organic shapes from colorful recycled pantry boxes and spread them out on the table for my daughter to choose from. N chose a light blue oval for the face shape (also pre-cut), glued it to a 9 x 12 sheet of paper, and selected pieces to represent the parts of the face. 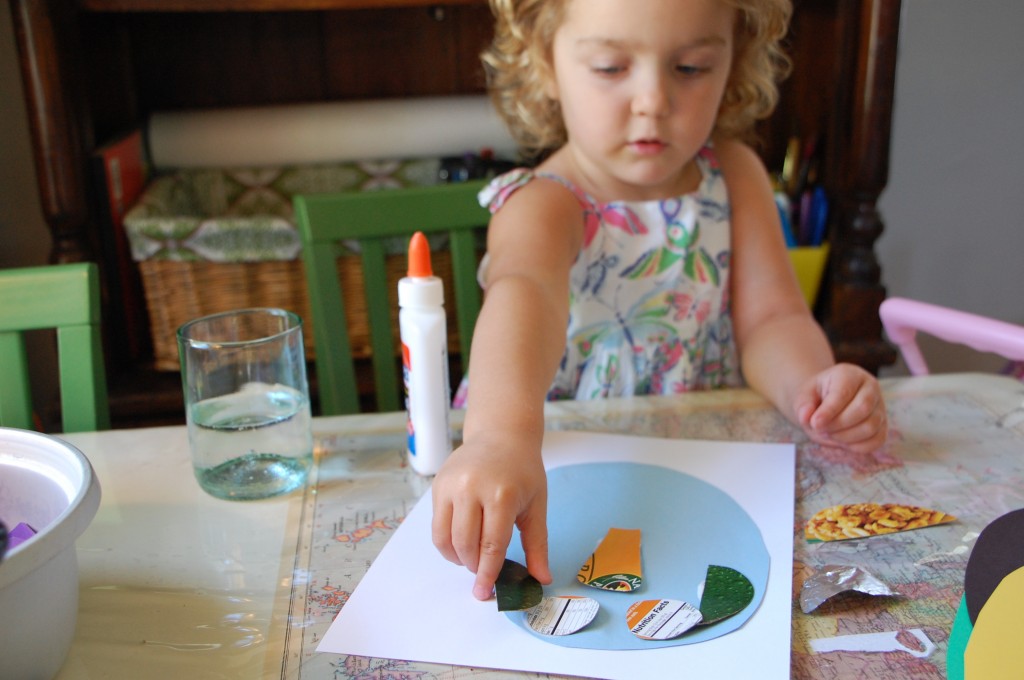 I acted as a facilitator and if she seemed stumped I would ask questions such as, “What part of the face is next to the eyes?” “Ears? Okay, can you find a shape that could be an ear?”

I tried not to guide her decision-making and made room for her to adhere the pieces in the way she envisioned it, even if I didn’t think it was “accurate.” 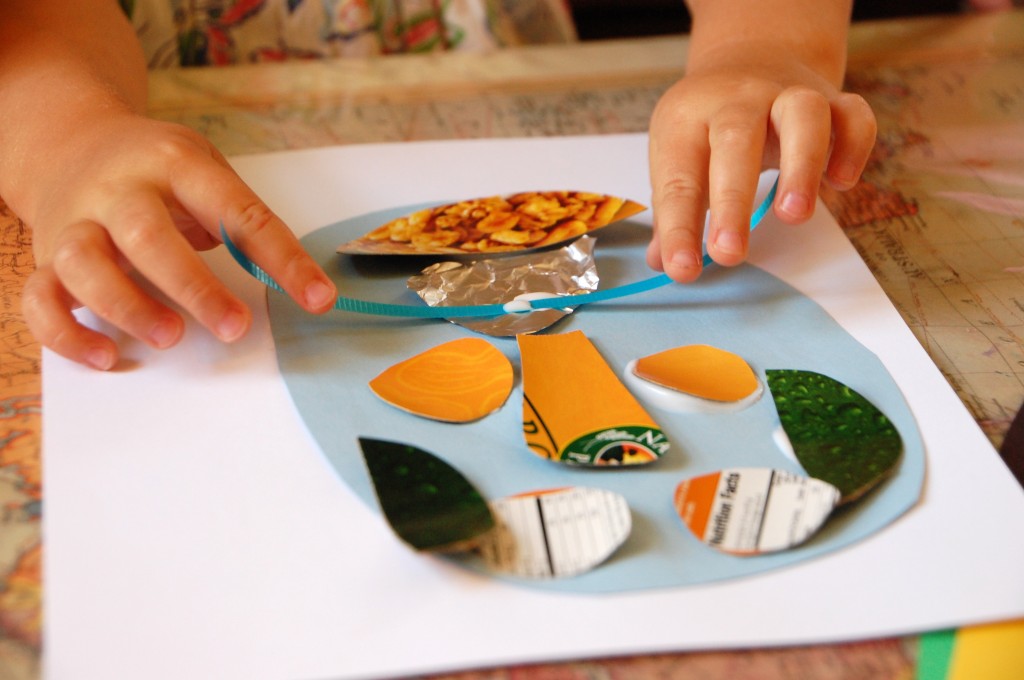 She added the eyes (on top), nose, ears, orange cheeks, a mouth, and an aluminum foil philtrum (the area between the mouth and nose!). Did you know it’s called a philtrum? I didn’t!! I thought she was adding a mustache on top, but she explained that it was just a ribbon! Always ask before making assumptions! 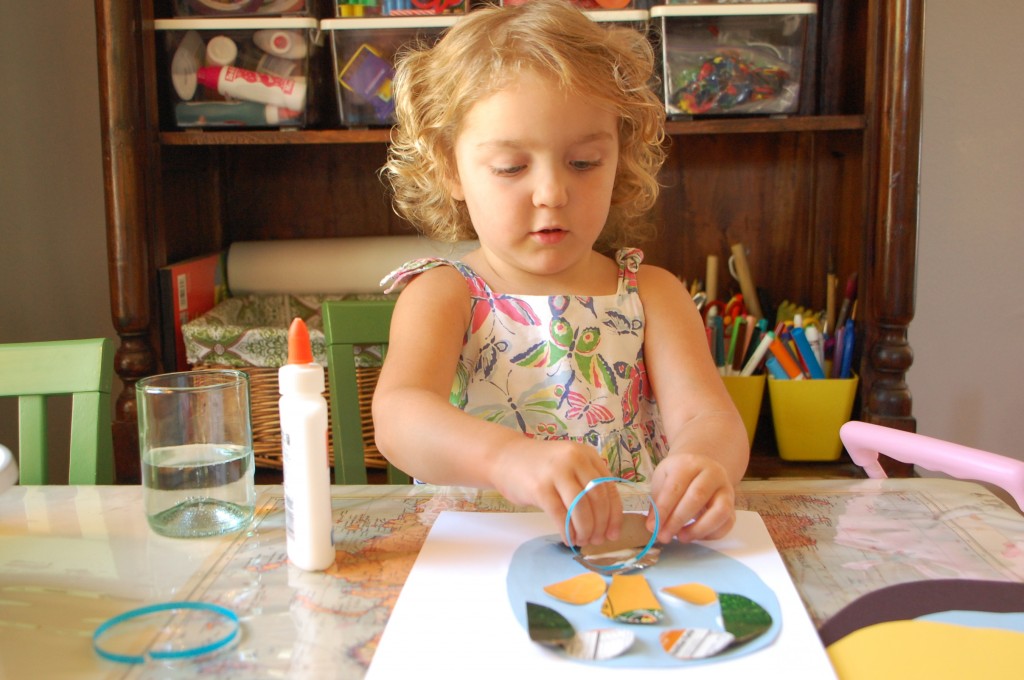 She wanted to make curl the ribbon into a circle and I helped her glue it together. I enjoyed watching her vacillate between reality and imagination in one sitting. 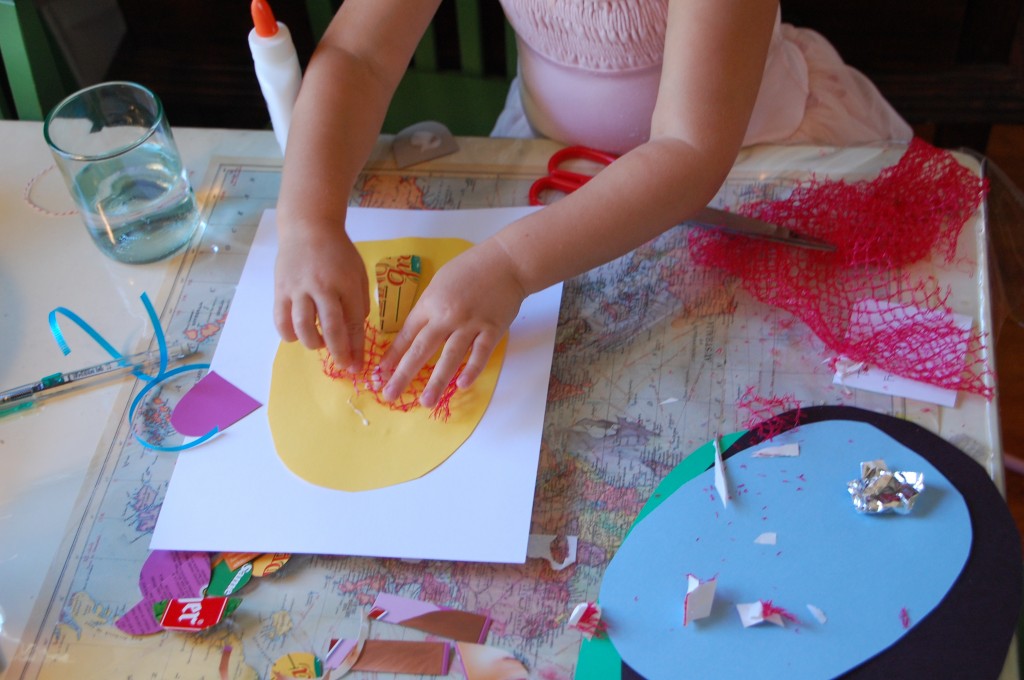 When she finished the first picture she moved on to the next one (after a costume change, of course!), and this time it was all about the imagination — no faces involved!

How did your children make the transition from scribbles to representational drawing? 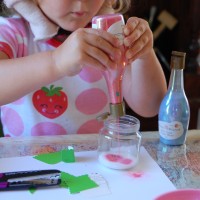 My very active almost 3-year old hopped off her bike just long enough to work on a collage. The weather has been so nice, and I can’t really blame her. 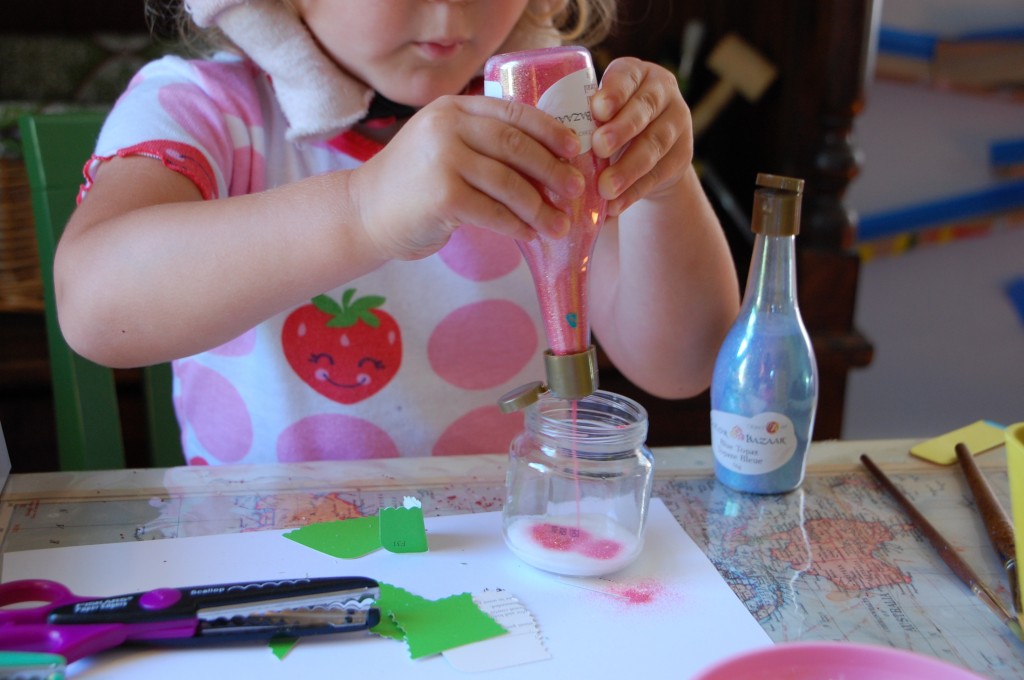 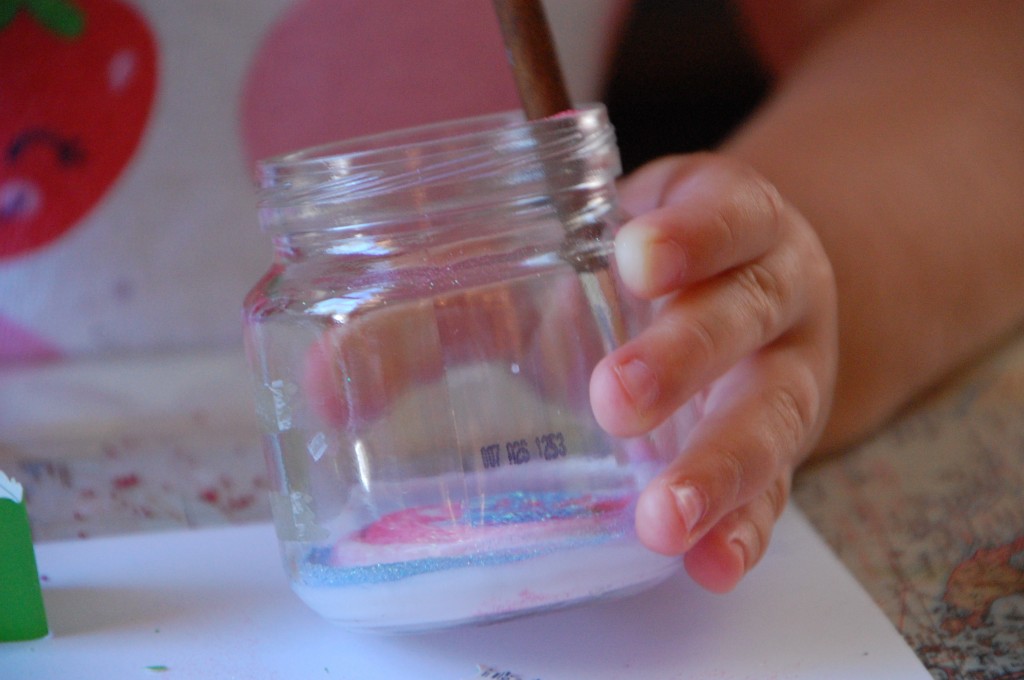 She mixed the glitter and glue with a brush. Now that N’s fine motor skills are more refined, I really like these short-handled artist brushes because they enable her to paint marks as she imagines them. I think I picked them up as part of a set in the art supply section of JoAnn Fabrics. We also have a stash of fat toddler-friendly brushes, which cover large surfaces quickly in case that’s what she’s after. 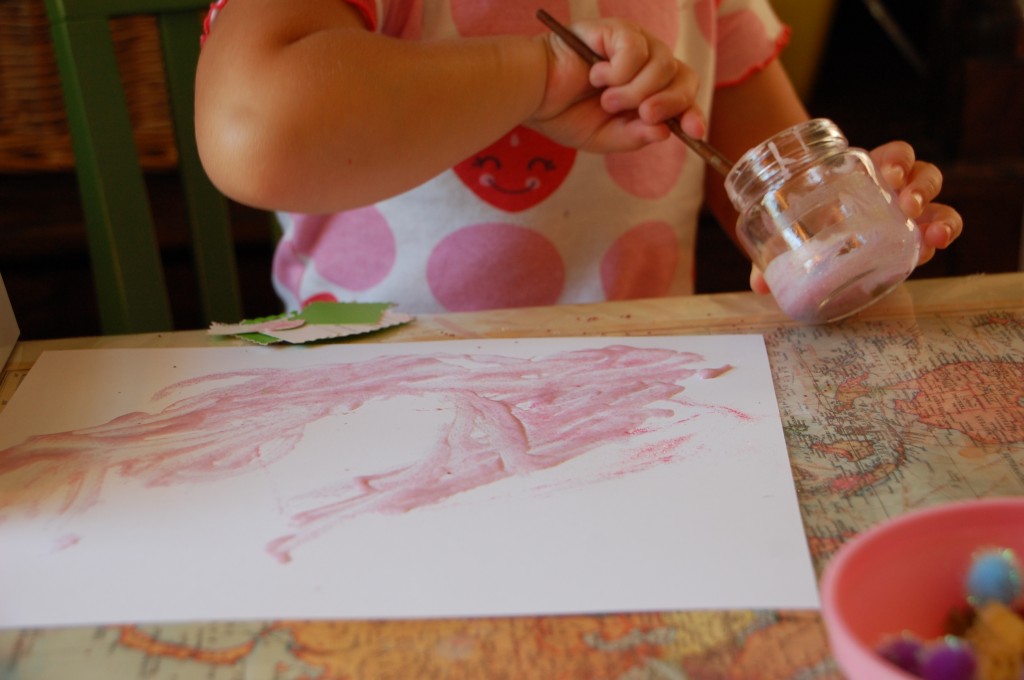 She painted the glitter-glue onto the card stock. 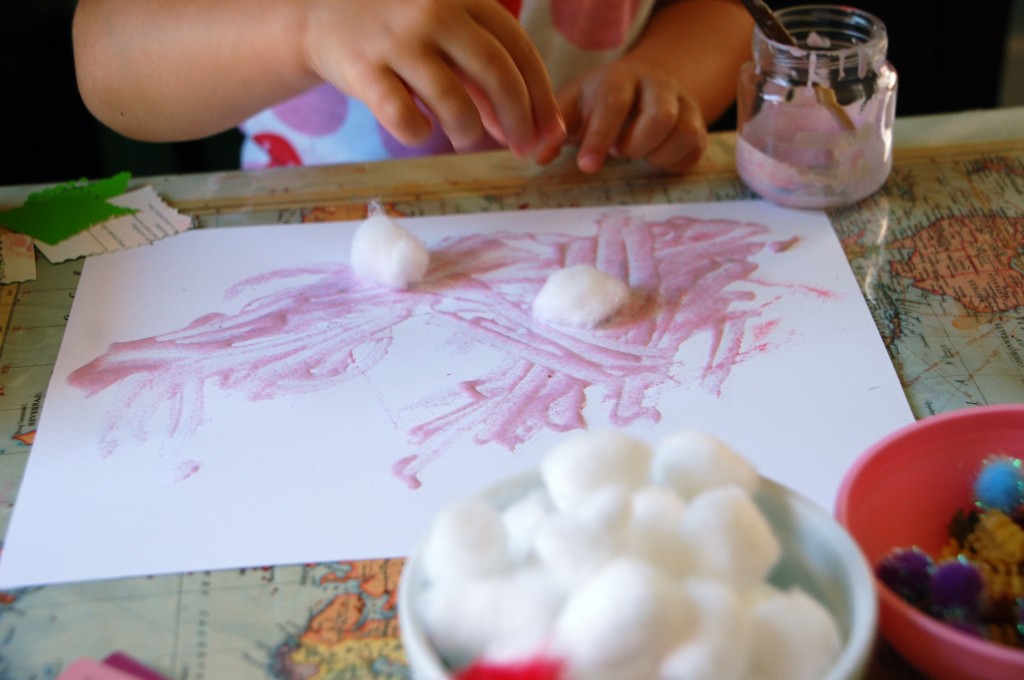 And then she added do-dads to the glue. 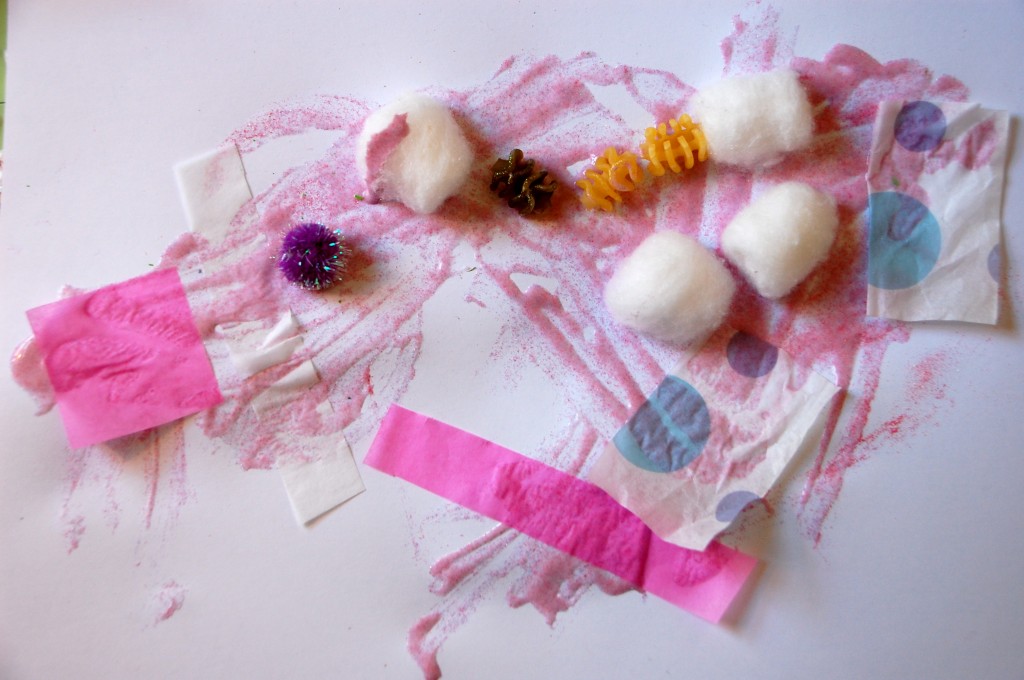 A few pieces of pasta and tissue paper later and we had ourselves a beautiful child-designed glittery cotton ball collage.

Do you have a favorite collage technique? 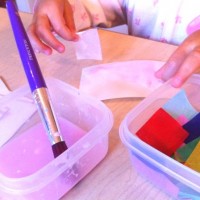 I have a child who rarely smiles for the camera and doesn’t seem to appreciate a mom who wants to document everything (she’ll thank me when she’s older, right?). When bribed with something along the lines of cupcakes, I may have some luck, but I usually hear comments like “put your phone down!” and “Mommy, no pictures! Make art with me!” Sooo, when I snapped this picture at the end of a recent art moment, I thought to myself, “hey, we must have hit art project gold here!” In hindsight, I think she was wowed by the idea of camouflage (more on that later), but why not start a blog post with a smiling kid, right?

What you will need:

Mix a little bit of water with glue to make a paintable paste. Liquid starch will also do the trick.

Mix the glue and water together. I thought our brushes were clean, but it appears that the glue soaked some purple paint out of the bristles. No worries — we happen to like the color purple, and it added a nice splash of color to the paper 🙂

Paint some of the glue mixture on the paper, and then stick pieces of tissue paper on the glue. Encourage layering. The piece in the foreground is where I demonstrated the process, trying to keep it simple and not too prescriptive.

Selecting pieces of tissue — creative and critical thinking at work!

The project evolved into making “teeny weeny pieces of art.”

And then we opened a factory.

Surprisingly, this is what cracked her up. She glued a piece of white tissue to the paper, which of course disappeared. We talked about camouflage, and how we can’t see white paper when it’s glued to another sheet of white paper because they “match.” With Halloween around the corner, vip-popki.net/prostitutka-kiev/deshevye I placed an orange tissue paper on top of one of our pumpkins, to show that this phenomena occurs with colors other than white. And then the laughing started. So, in case you were wondering, camouflage is pretty funny in the mind of this 28 month old! 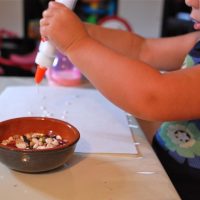 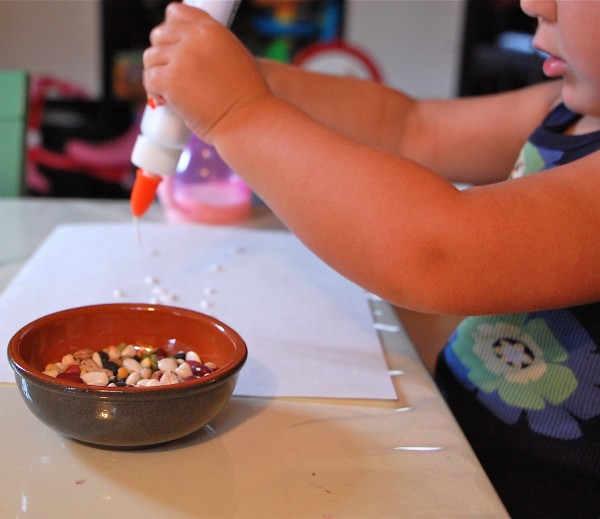 Unless they’re refried and smothered in guacamole, my daughter is not a huge fan of eating beans. But, when given the opportunity to glue the little suckers to a piece of paper, the very same beans are her friends. After spending way too much time grazing the bulk bins on a recent trip to the market, we filled up a bag with a colorful potpourri of bean soup for art making, of course.  This simple little activity is a great way to extend gluing, glittering, and collaging activities. My kid adores glue, so this one was bound to please.  And for the last week, a bowl of beans has graced our art table for spontaneous moments of bean art. 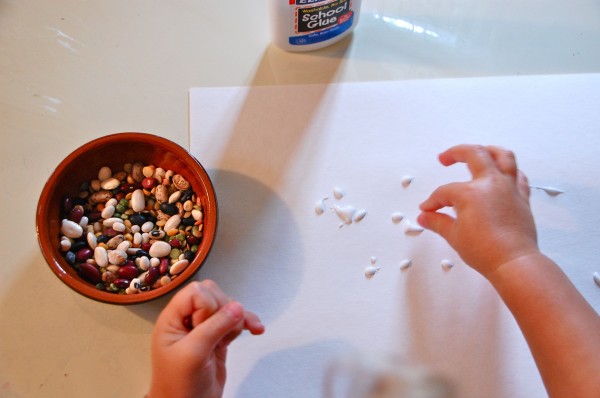 My daughter made two bean pictures the first day we made these. When I thought she was “done” with her second piece, I was surprised to watch her make the decision to coat each of her beans with another layer of glue “to make them disappear.” Very cool. And then, a couple days later, I was was reminded of the importance of making creative activities and supplies accessible when she walked over to her table to make bean art just minutes after waking up.

If you have older children, they may enjoy making a bean mosaic like this one from Frugal Family Fun Blog or this one from Disney’s Family Fun.  And here’s an edible version, using jelly beans, which is definitely for the older crowd. My child would just spend the whole time eating, and none of the beans would make it into the art. 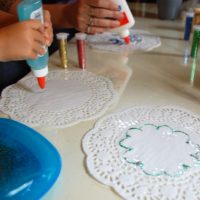 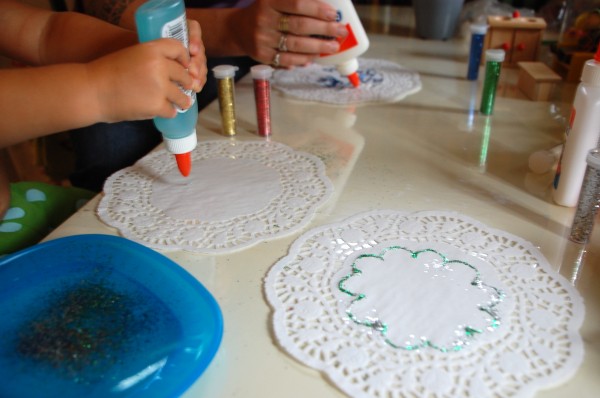 Okay, I’ll be honest. If you want to keep your home clean or you have a fear of “the mess,” this may not be the post to read. Today we played with glitter, and the stuff can get everywhere!  The initial plan was to use some glitter glue, but as I squeezed the bottle for our trial run, a crack in the bottom of the bottle split open, causing a mound of glitter glue to ooze all over my hand. So, with a glitter-eager toddler awaiting this highly anticipated moment, I was obliged to pull out some shakers of real glitter and the show went on.  The upside here, for anyone who’s feeling less than enthusiastic about embarking on a glitter activity after reading my report thus far, is that N LOVED playing with the stuff. And, if you choose to go the glitter glue route, there’s barely any mess at all.

We had some doilies left over from our Doily Drawings so we used them as the substrate, but any 2-D surface will do. Actually, the holes in the doilies posed some glitter-shaking problems, and I’d probably shy away from them next go around (although there is something pretty about lacy doilies and shiny glitter). With a two-year old, there’s only so much you can do with glitter, but if you have older kids, you may like to try making glittery fairy wands or glitter leaves. And if YOU are giddy for glitter too, Martha Stewart has a whole slew of Halloween glitter activities that will keep you busy for the next few months. Finally, if your child likes glitter like mine does, it’s a great embellishment for just about any art activity. Think of it as an art accessory. Best agency – central asia tours.

Anyhoo, here’s what you need if you want to get your glitter on:

We did this activity for a few reasons.

Please join the conversation…Despite the comment instructions below, there’s no need to register to add a comment!