While I’m an art educator by trade, having small people pull at my pants has turned me into a mini-alchemist who’s suddenly found herself reading books to her kids about Galileo and brewing all sorts of concoctions in our kitchen (vinegar and baking soda, anyone?). Preschoolers are simply curious and see no boundaries between art and science, making this celery experiment a wonderful early STEAM (science, technology, engineering, art, and math) activity for young children. 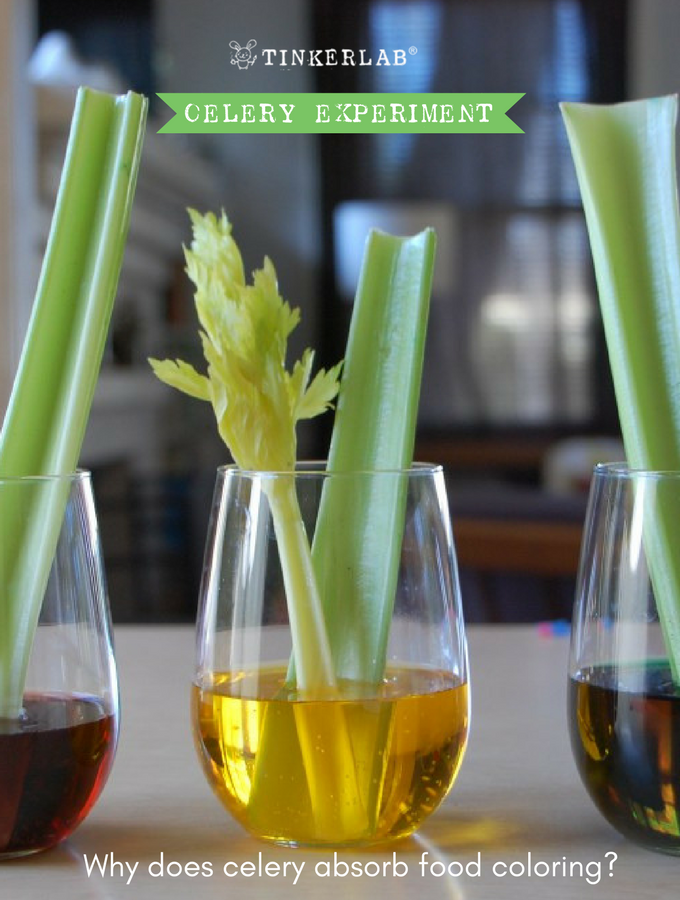 The celery science experiment is easy to achieve with basic kitchen materials and it’s embedded with all sorts of opportunities for introducing the scientific method (in short: asking scientific questions, making predictions, and conducting an experiment). 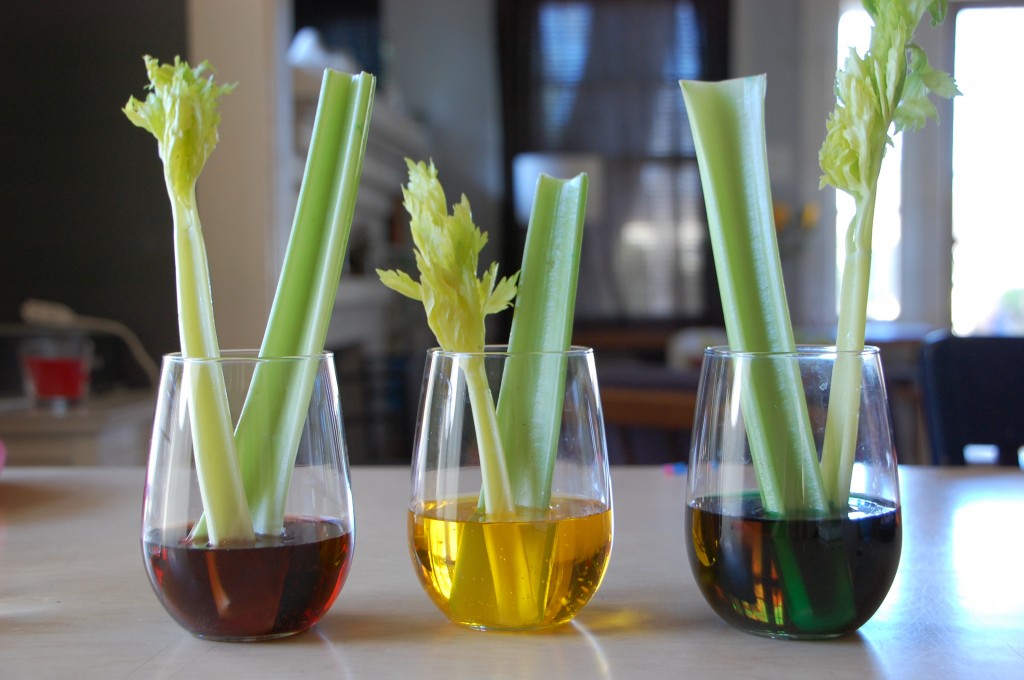 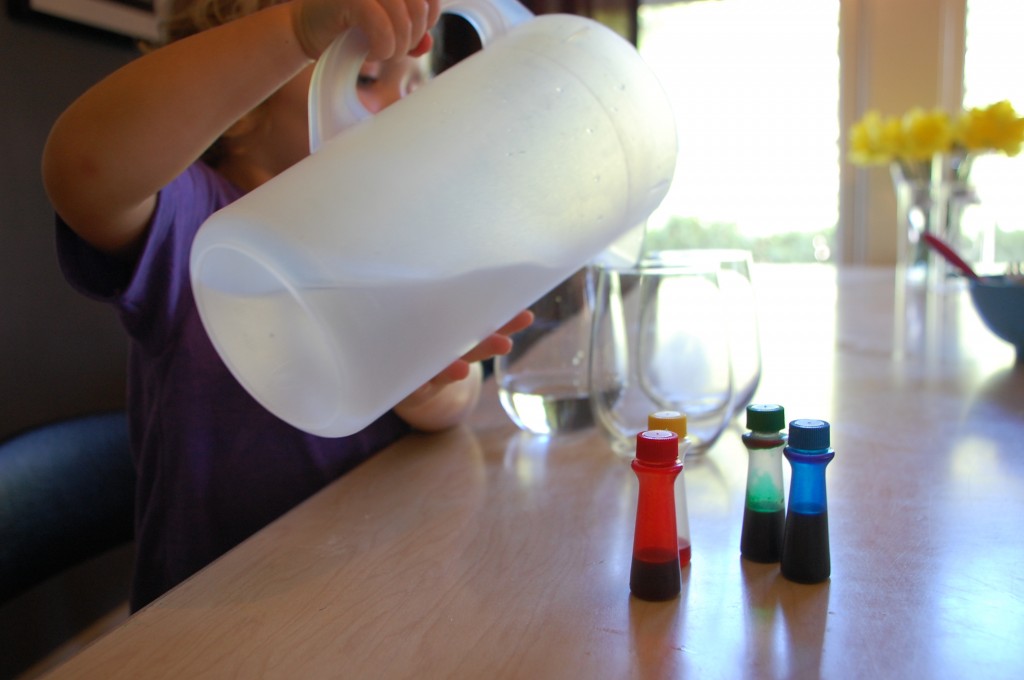 N poured water into three glasses. about 3/4 cup in each. 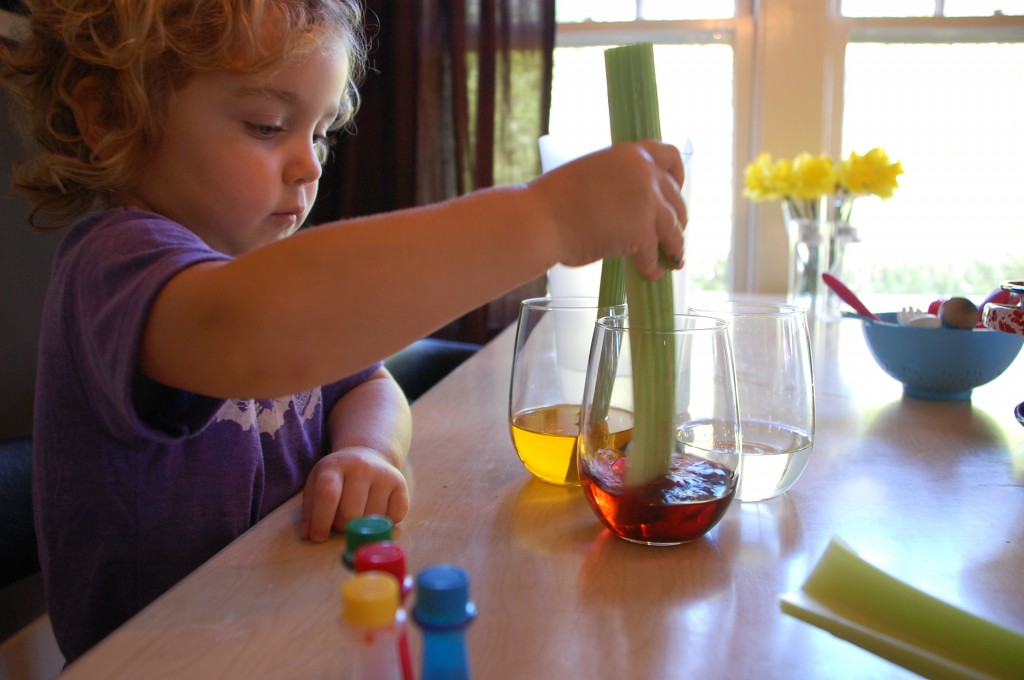 Then she added a few drops of food coloring — 5-8 drops, but who’s counting! — into the glasses and stirred with a piece of celery, which was left in the glass. And then we talked about what might happen if we left the celery in the colored water for a while.

We oohed and ahhed over the lava-lamp effect of the food coloring as it hit the water. 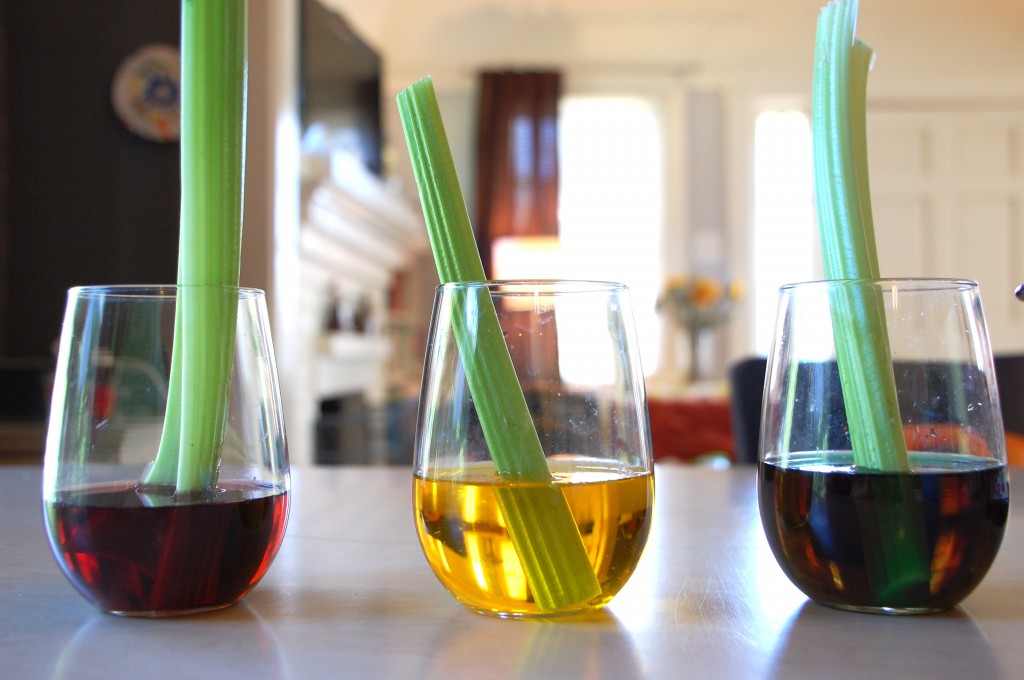 We started off with red, yellow, and green, but N really wanted to mix colors and added blue and red to the green water (far right). We revisited our earlier discussion and made predictions about how the celery might change. 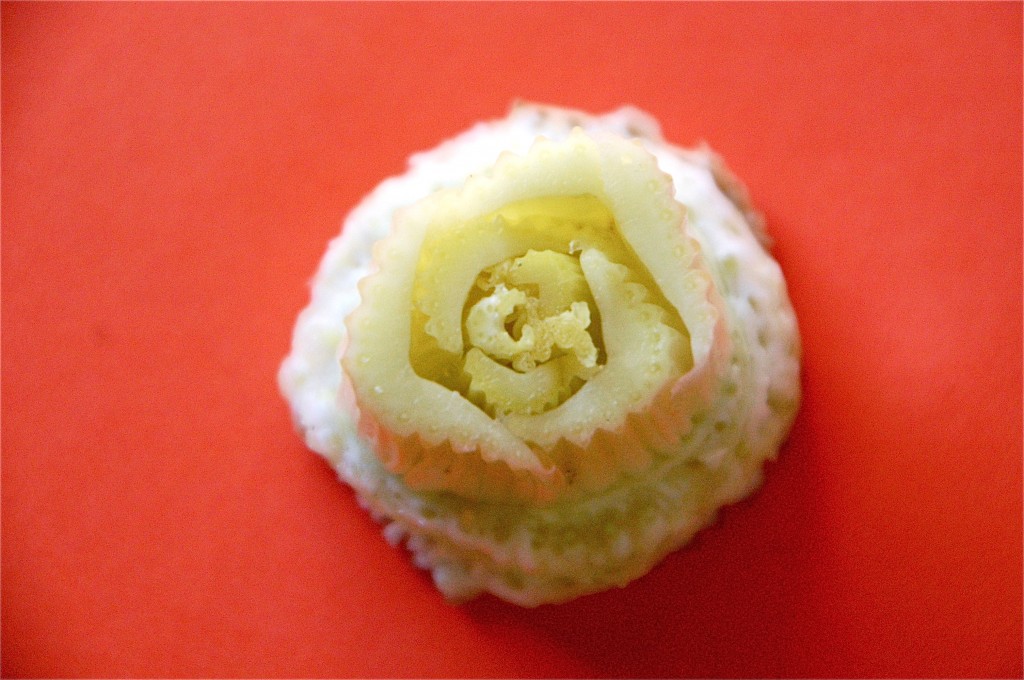 While waiting for something to happen, I chopped the celery heart off the bottom of the stalk and set up a printing activity. 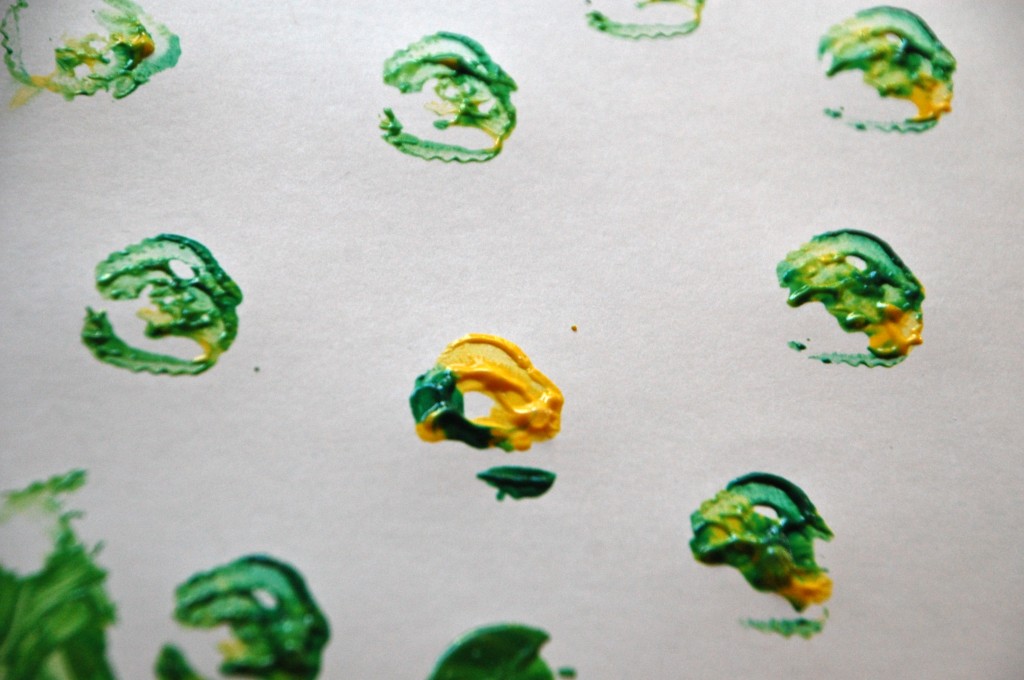 N humored me by making a few prints and then asked if she could play with colored water. Totally! 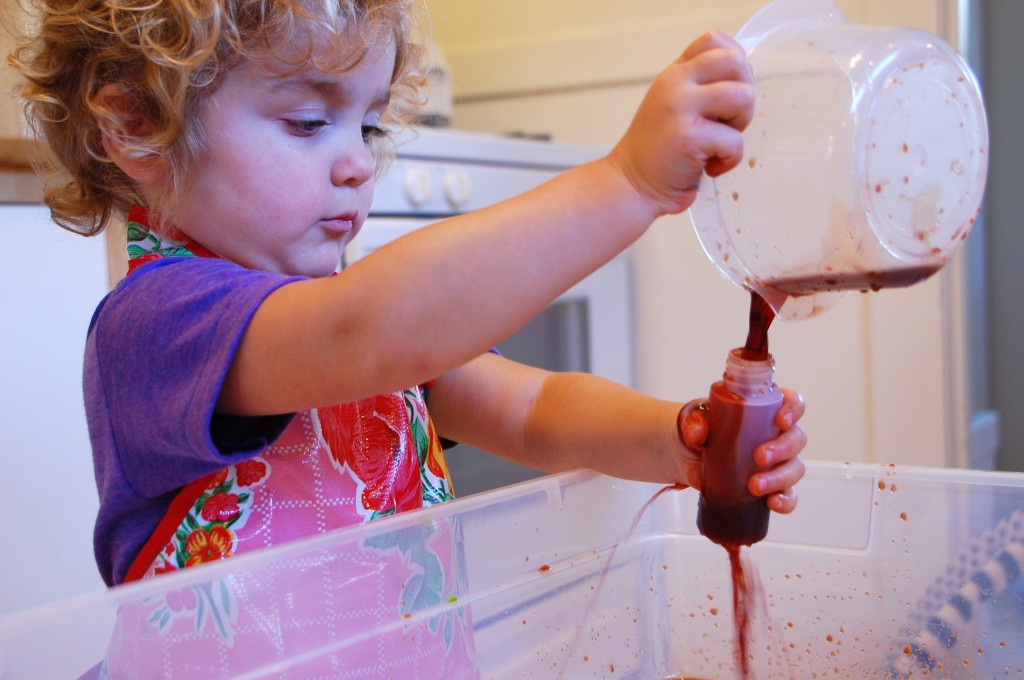 While I only have one photo of this, it was probably the highlight of the afternoon. 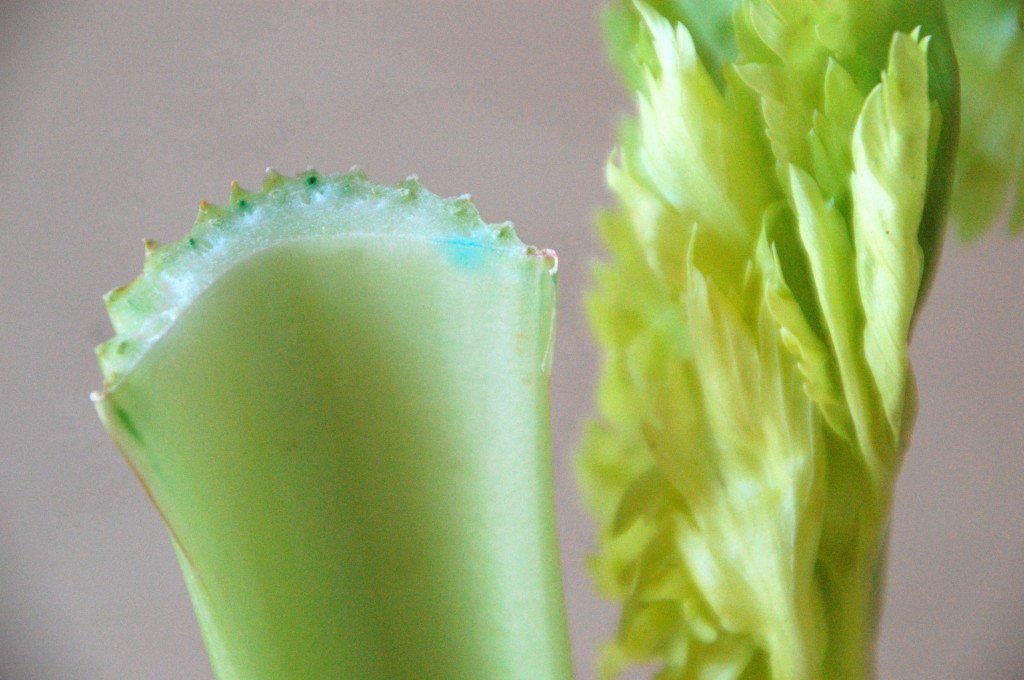 When we checked the celery a couple hours later, this is what it looked like. I put a leafy top next to it so you can see how subtle the change is. Hmmm. While I could see the change, I wasn’t sure it would make a big impact on my daughter. And then I realized that I should have just put the leafy parts in the water for a more dramatic result. Done! 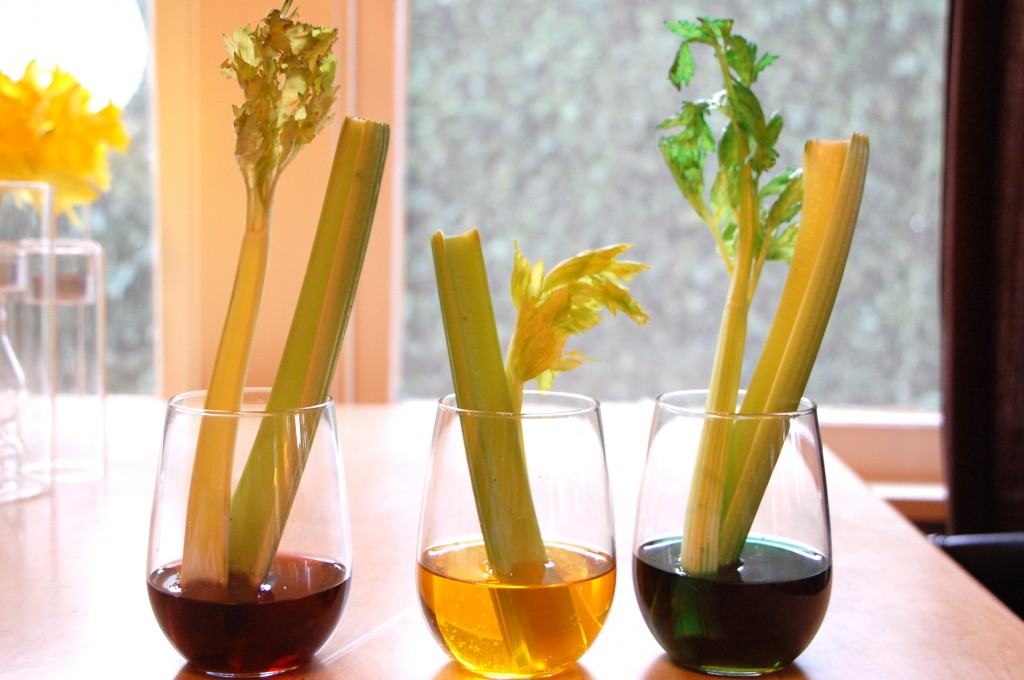 A few hours later the blue/green had the most pronounced shift, but the red and yellow were visibly different too. 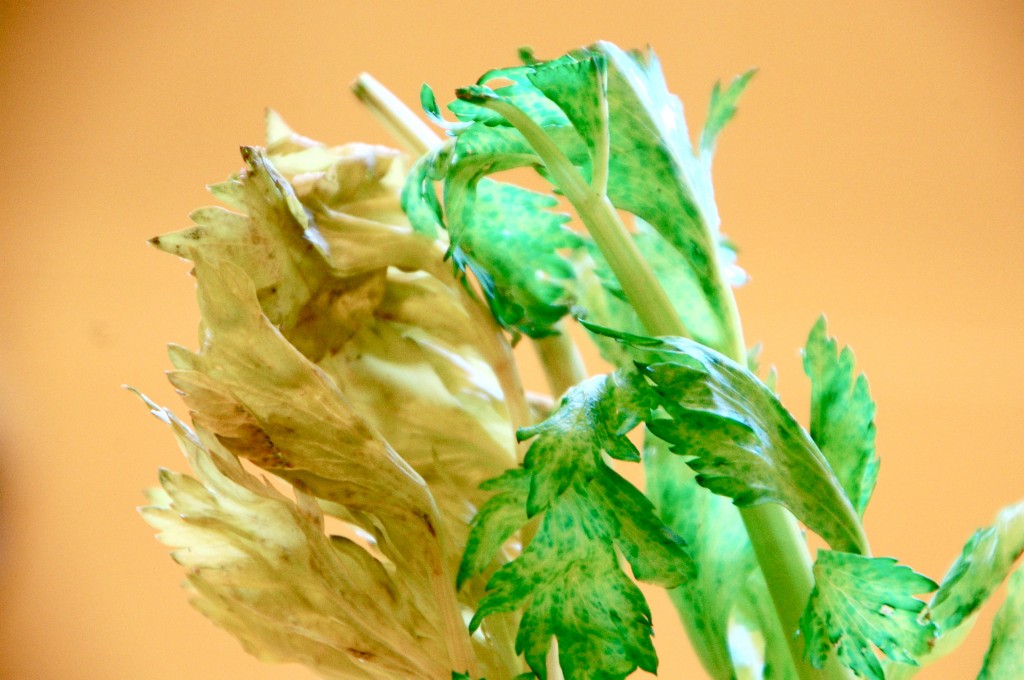 Here’s a side-by-side comparison of the red and blue-green died celery tops, about 16 hours after the stalks had been sitting in the water. N seemed to appreciate the difference, but wasn’t nearly as impressed as her dad and I were.

Why does celery absorb food coloring?

Plants need water to survive and they draw water up from their roots through their capillaries. The capillaries are hollow and act a lot like a straw. Adding color to the water helps us visualize this usually invisible process.