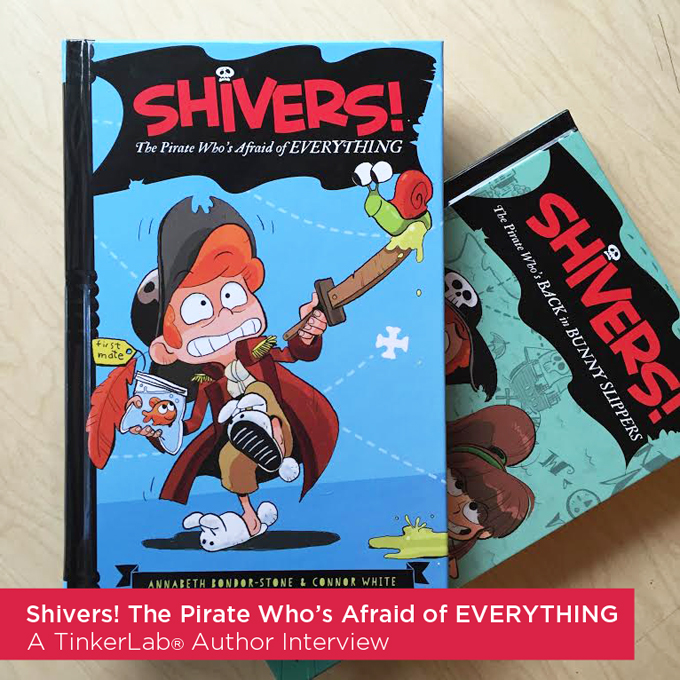 I was recently introduced to a brand new chapter book series called Shivers! The Pirate who’s Afraid of EVERYTHING (affiliate). It’s the hilarious story of young pirate Shivers who’s, as you’ve probably guessed, afraid of everything. He lives with his phobias and pet goldfish on a beached pirate ship, and is joined for epic high-seas hijinks by his very brave best friend, Margo.

My girls, ages 5 and 7, love the books and we came up with the idea to interview the authors, Annabeth Bondor-Stone and Connor White. The girls came up with 18 questions and Annabeth and Connor were kind enough to answer them ALL! It’s fun to get a peak into an author’s mind, so if you read Shivers! with your child, you’ll want to follow up by reading this interview with them. Bonus: if you’re teaching a unit to go along with the books, the Shivers! website offers awesome free teaching guides, story prompts, and activity sheets.

I love my kids’ questions (I know, I know, as their mom I’m programmed to adore them), and the real joy is reading the author’s insightful and funny answers.

Without further ado, on to the interview!

Shivers the Pirate: An Interview with the Authors 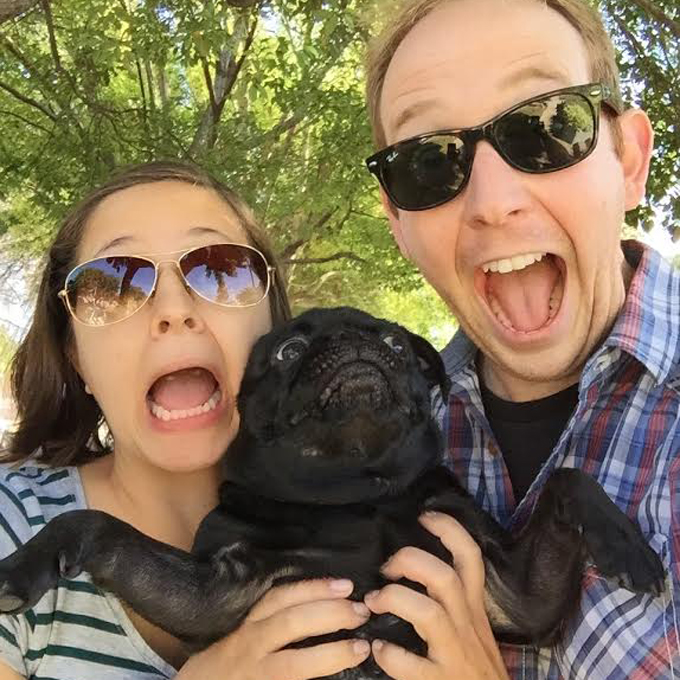 How long did it take you to write each book?

The first book took us about two years to write, but that’s because we didn’t know we were writers yet. We had other jobs and we had never written a book before. Now that we’ve practiced, each book takes about a year to write. Then it takes another year for our illustrator to draw all the pictures so the whole process takes about two years.

Which of the Shivers books do you like better?

Have you written any other books?

No, this is the first book we’ve ever written. Before Shivers, Annabeth had written lots of plays and a movie script. And Connor once wrote a grocery list!

Where do you live?

In Los Angeles, California between the sushi restaurant and the taco shop. 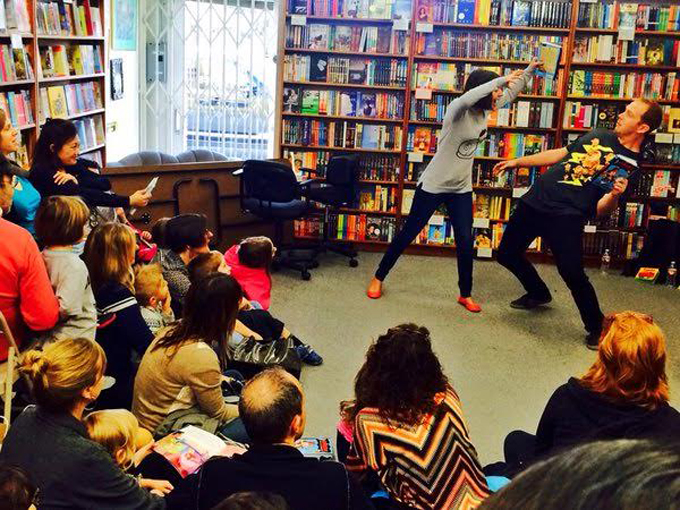 Annabeth and Connor at a live event.

How did you choose your illustrator?

Our publisher found our illustrator, Anthony Holden. Anthony drew some sample sketches of Shivers and Margo and we knew immediately that he shared our sense of humor and could bring Shivers to life in a way that no one else could. Just like Shivers was the first book we’d ever written, it was the first book Anthony had ever illustrated. 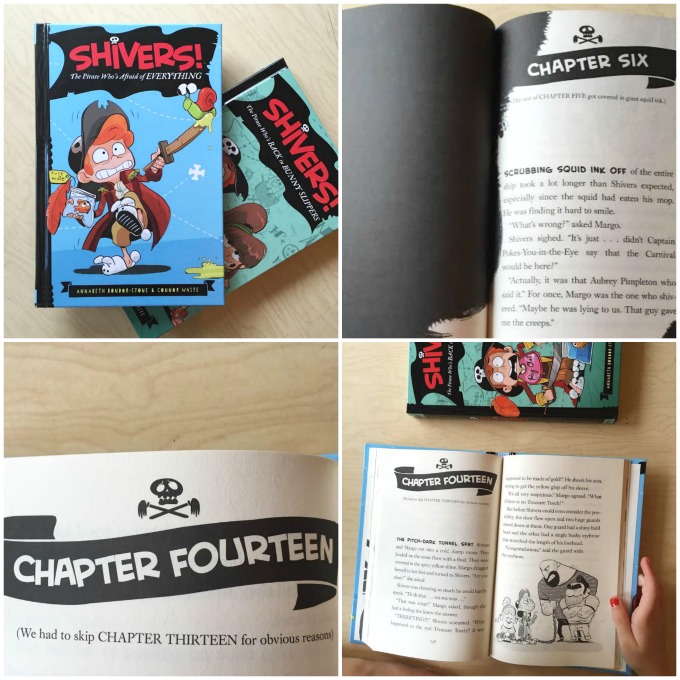 How did you come up with all of the hilarious things? Like the squid ink on chapter 5 and skipping chapter 13?

In order to come up with hilarious things, you have to get pretty silly. If we’re not feeling funny one day, we’ll put a pizza on our heads like a giant floppy hat, so at least we look funny. And that’s a pretty good start.

Also, comedy is about surprise so we wanted to give you something you wouldn’t expect from the chapter numbers, which are usually a pretty unsurprising part of a book.

Do you think all the great ideas in the world are already taken?

Sometimes it feels that way. But there are always more great ideas. Just the other day, we thought about inventing Break’N’Bake Bacon Cakes, which aren’t very healthy but they sound delicious.

Did you have any arguments while writing the books?

We never argue while we’re writing but we definitely disagree sometimes! If Annabeth likes one idea and Connor likes another, we throw out both ideas and come up with something brand new that makes us both happy. And if we really get stuck we find it useful to take our pug for a walk. 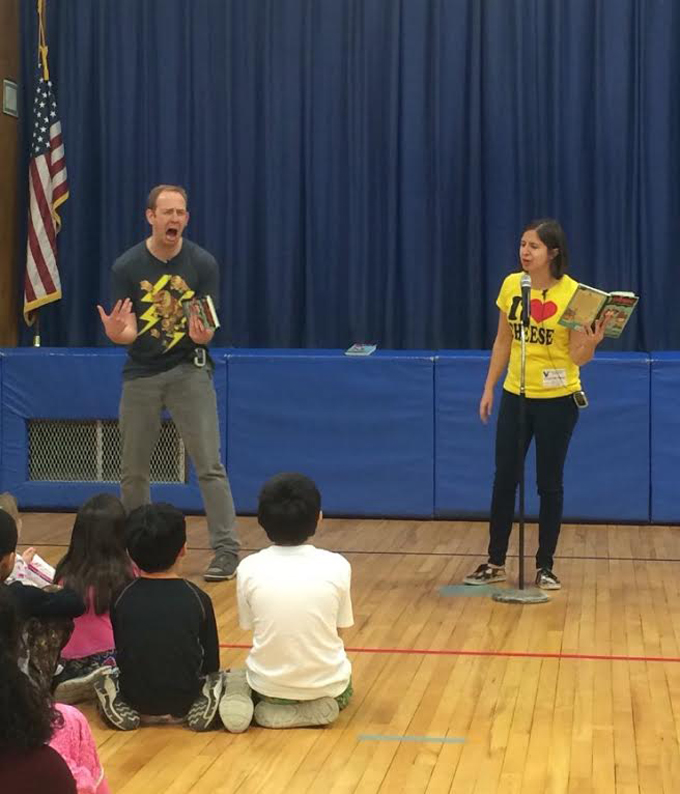 Connor and Annabeth at a school book reading event

Does Margo have a nickname?

No, but we’re taking suggestions.

Why is Margo’s dad introduced but not involved in the story?

We like that Shivers and Margo have to solve their problems on their own so we don’t usually have a lot of parental supervision in the books. But we thought it was important to give you an idea of Margo’s background, and how she has always liked going on adventures with her dad, Police Chief Clomps’n’Stomps.

Was the Shivers series fun and exciting to write?

Shivers is so much fun to write! We love writing about his crazy adventures but we also love writing about the regular details of his life, like what normal everyday things fill him with terror. Like a toaster. That thing will pop up when you least expect it. 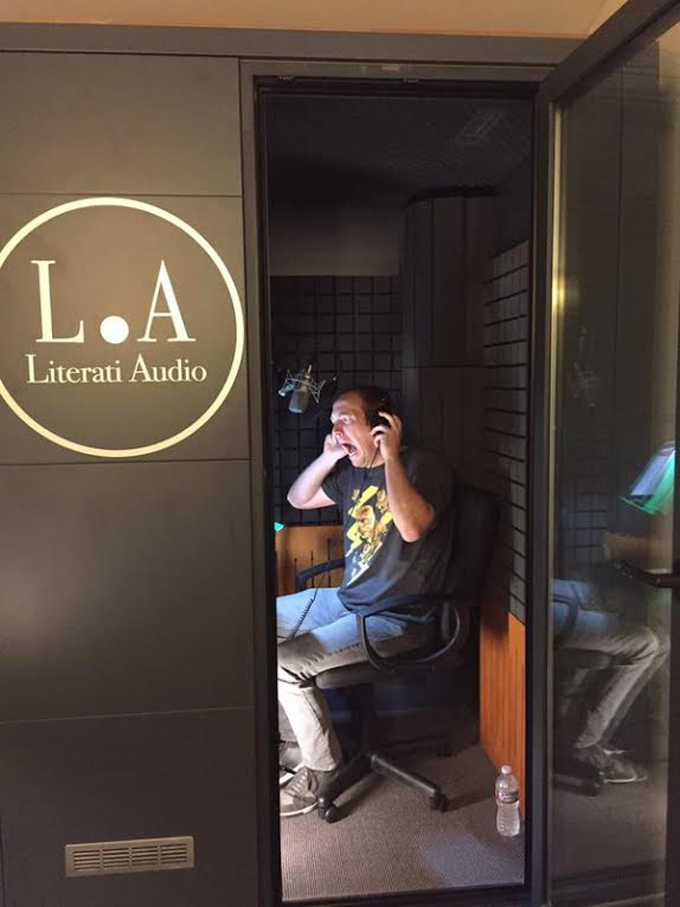 His bunny slippers. They’re soft and cuddly, plus they protect him from one of his greatest fears: his own toenails.

About how many hours a day did you spend writing these books?

We try to write for three hours every day but sometimes that includes long walks, snacking, chatting, and stuffing our faces into pillows. 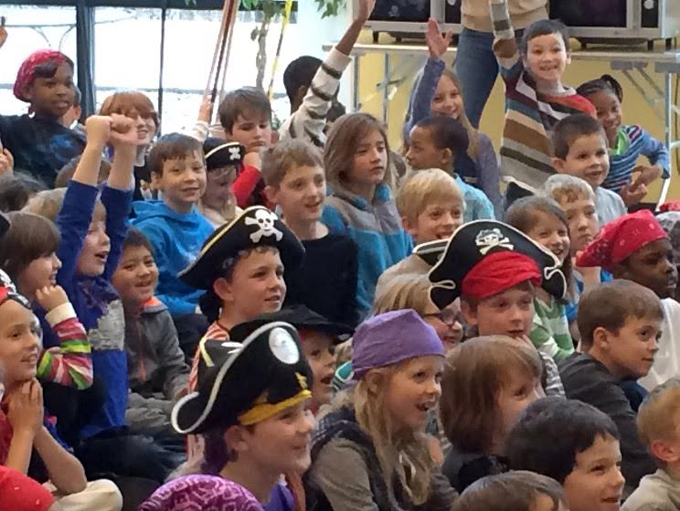 Did you ever get bored while writing?

We never get bored while writing but sometimes we get frustrated. When we’re stuck, we like to think of writing as solving a big puzzle instead of waiting for an answer.

Do you get writer’s block and how do you handle it?

Definitely! We think that writer’s block comes from a fear that your writing won’t be perfect right away. So we try to face that fear by allowing ourselves to write a “bad version” of whatever we’re working on. We also look for inspiration from the outside world by going to museums or reading great books. Also, there’s snacking. Did we mention snacking?

Can you cross your eyes?

Have you ever been interviewed by a 5 and 7 year old?

Now that we’ve reached the end of this interview, we can officially say yes.

If you’d like to learn more about the authors behind Shivers!, check out this video: