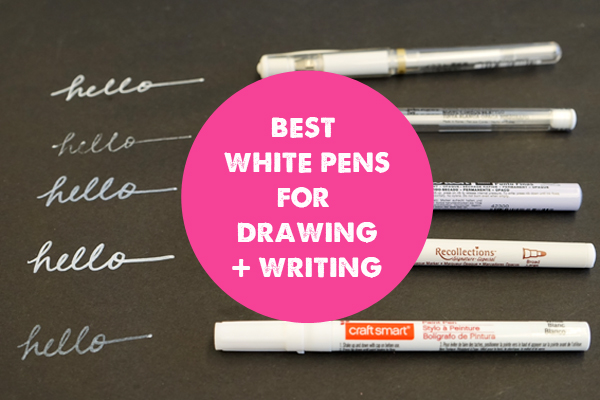 Writing and drawing with white pens on black paper is a fun way to add some pizzaz to a drawing practice. In our traditional black on white world of mark-making we’re accustomed to putting dark marks on white paper, and perhaps it’s the tonal reversal that’s compelling and unique about white on black drawings. However, finding a good white pen that will show up on black paper can be a challenge. At least it was for me, and I wanted to spare you the hours and expense of trying and testing a ton of pens that might prove disappointing.

A few months ago we invested in a big roll of black paper to cover our art tables. This paper is fantastic. It’s heavier than wrapping paper and thinner than Kraft paper, so it does a nice job covering the table without being too difficult to secure with tape.  With the tables covered, we were itching to draw on it with opaque pens, and white ones in particular. Check out White Drawings on Black Paper to see the drawing prompt that kicked off our search for the best white pens.

After a few false starts with pens that faded against the bold black backdrop, I picked up some white pens at the local craft store. Unfortunately, these pens didn’t cover the paper well and one skipped spots as I wrote. Hmmm. There must be a better pen out there!

It turns out that not all white pens are created the equal.

This prompted to me to do a little digging to find the best white pen for black paper.

Here’s what we worked with:

I brought my 4-year old into the decision-making process since she’s the one who actively uses the table as her own personal scribble zone. 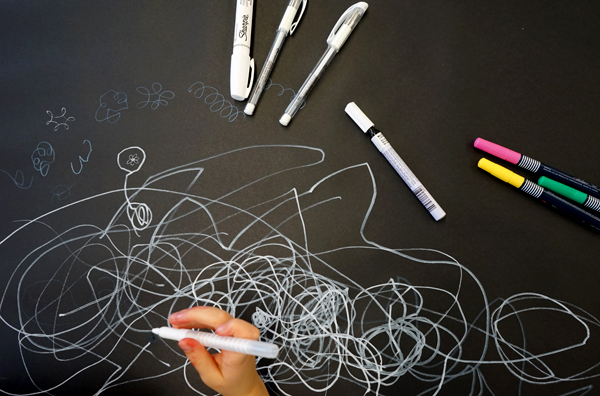 Signo Uni-ball (Amazon)
Our hands-down favorite. Since doing this test I have since ordered three more, and frequently travel with one in my bag. There’s a reason this pen gets 5-stars on Amazon. The ink runs consistently and it’s thick and opaque. It also writes like a regular pen, meaning that it’s not bulky like a paint pen. (3 for $7.50)

This was our least favorite of the group. With the ball-point system, the ink came out in chunks and wasn’t smooth at all. Pass. (2 for $5.89)

This pen has to be primed by pumping the nib and up and down, to get it going. Not as bright as the Recollections pen (below), but it works. ($6.49)

This pen was a favorite. It’s easy to write with the color is opaque. It’s perfect if you’re looking for something broad and thick. ($1.99)

This is one of the first pens we used. The ink flowed well and it was easy for my daughter to use. The only complaint is that the color wasn’t hyper-opaque. ($0.99) 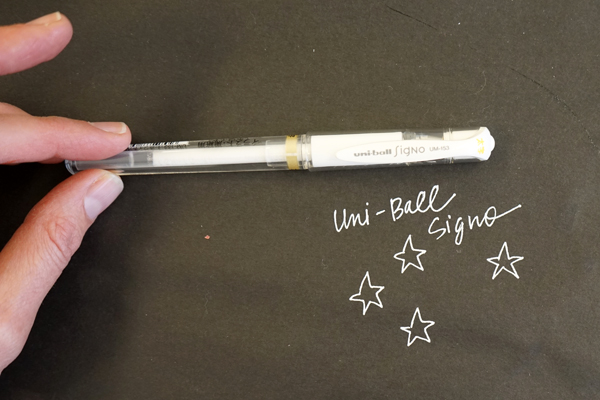 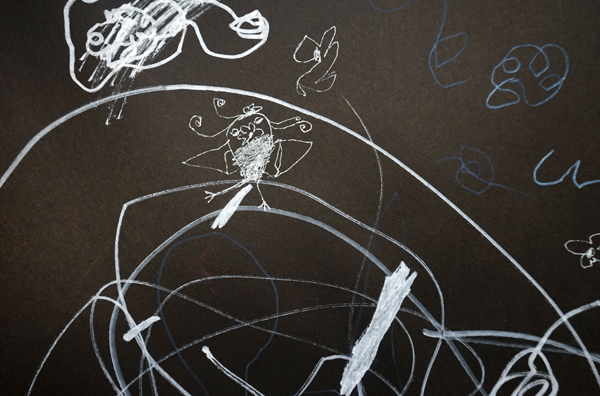 If you come across a particularly fantastic pen or have an opinion on this topic, I would love to know about it. Share a link in the comments below.