Make this easy and fun “You Rock” Valentine’s Day card from your rock collection.

Today I’m joined by Tenaya Wallace who is sharing her humorous eco-friendly pet rock Valentines with us. Welcome Tenaya! 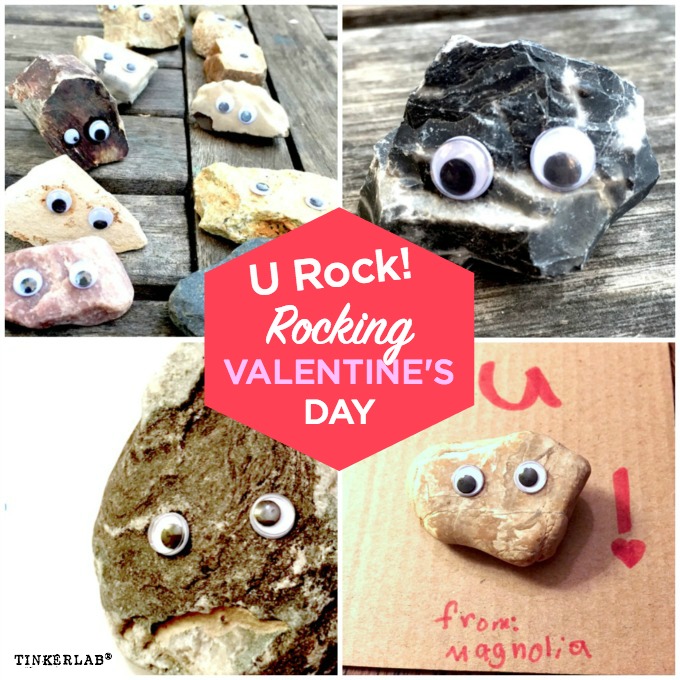 When my son was three I learned the importance of unique Valentines. Xan attended the most parent-involved co-op in the hippest hood in America (seriously, it was in Forbes) and we sent him to school with store-bought cards from the local CVS pharmacy. I think they were Sponge Bob-themed. 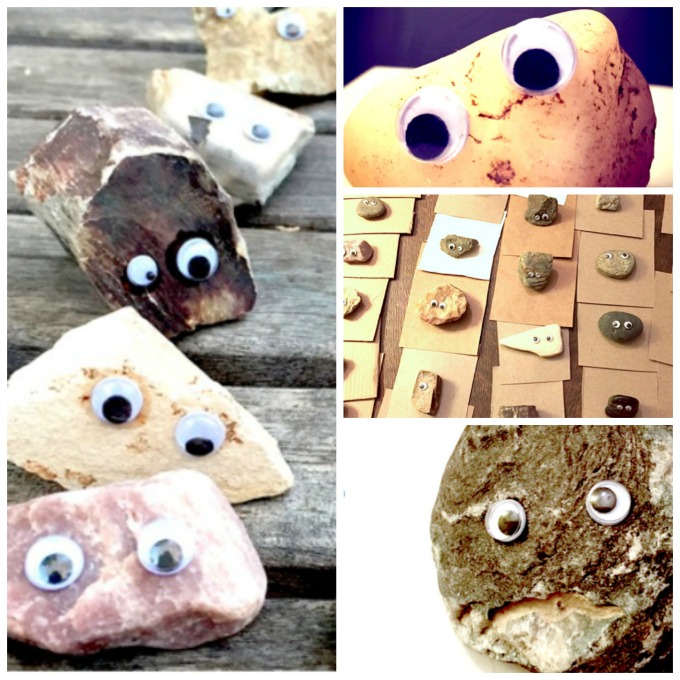 What we received back, from every single kid, were hand-made Valentines, including a painted rock, that we still have. From that point on I made sure to never be outdone by these crafty moms.

But this year I ran out of ideas. My husband joked, “why don’t you paint rocks” and we laughed at the reminder of our store-bought ways.

The kids and I turned to Pinterest, searching “DIY no candy kids Valentines” (because candy is as passé as pre-fab cards). There were super-cute ideas but all involved little plastic toys and since I am 1) unemployed and don’t have spare change for plastic toys, 2) working under a tight deadline and don’t have time to order said toys and 3) a former environmental activist who should despise plastic toys, I decided to put in a search for “pet rocks.”

The results where mostly pictures of smooth round stones painted to look like sleeping cats, but there was one photo of a ragged little rock with googlie eyes glued on. The kids loved it. We were making pet rock Valentines 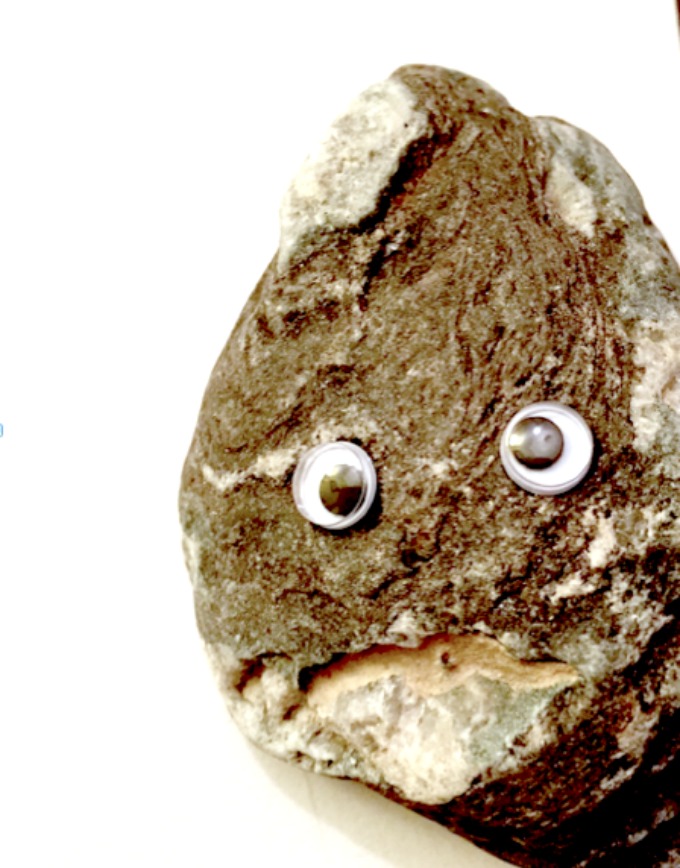 My son collects rocks and keeps them in a box that doubles as an end table. He is possessive of his rocks, picked up on camping trips or walks around the block. But he saw wisdom in paring down his collection and actually got excited about using some of them for this year’s Valentines. Score for mom who has been trying to get rid of those rocks for years. 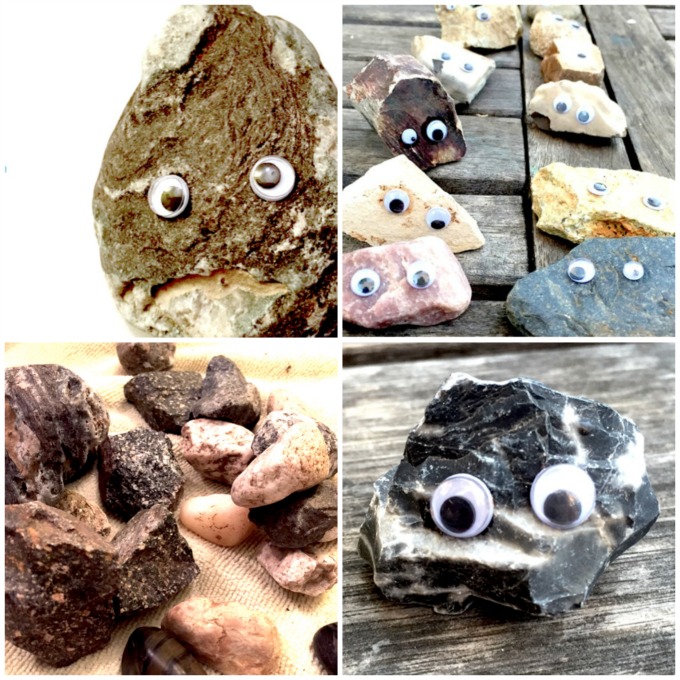 We selected 38 rocks for Xan’s class (yes, 38…but that is another story) and 26 for my daughter’s. We washed them and set them in the sun to dry. The next day I took a quick trip to Jo-Ann’s Fabrics and spent $4 on googly eyes, which was more than I needed but I decided to get both the small eyes and the really small eyes just to get crazy.

When the kids got home from school I put out the rocks and eyes. They each selected rocks they liked and placed the eyes where they wanted them. I was shocked at how good they were at transforming little nuggets of nothing into personality-filled friends by just placing eyes in a certain place. This part of the process really let them be creative and made the project their own. 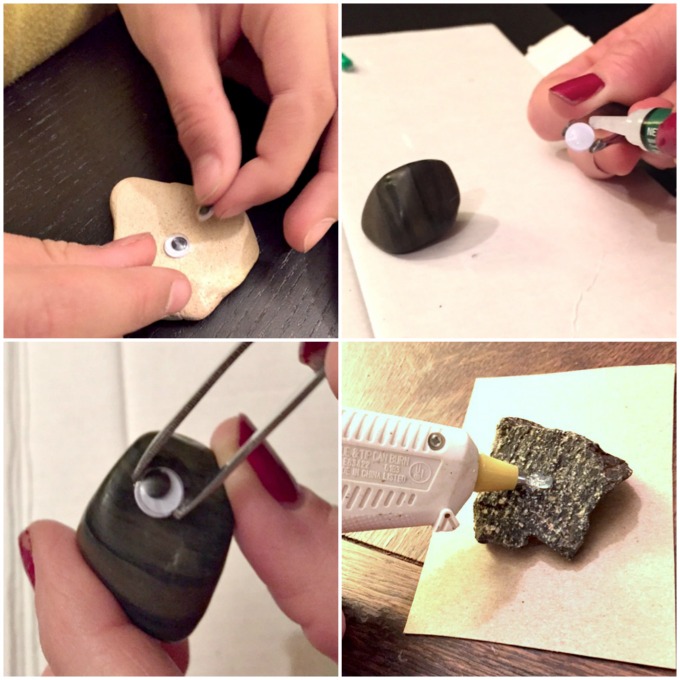 I glued the eyes on, because no mom needs to take their kid to urgent care for googlie eyes crazy-glued to fingers. The crazy glue worked like a charm on both porous and smooth rocks. 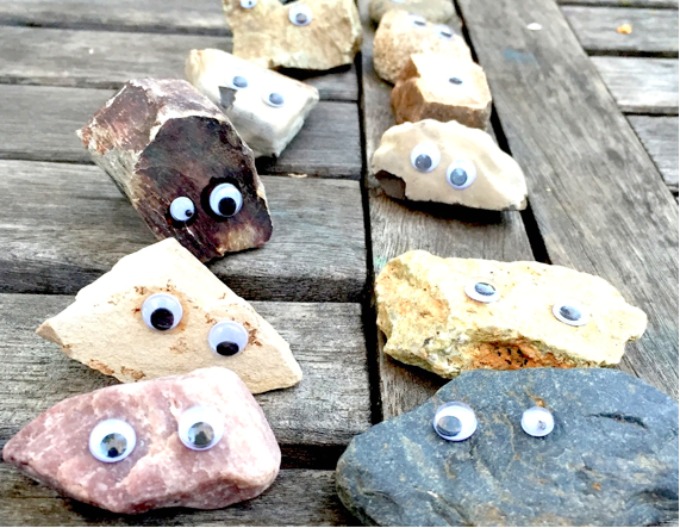 Because I am poor and lazy and a former environmentalist, I suggested to the kids that instead of putting the rocks on notecards, we could cut up cardboard boxes from the recycling bin. They loved the idea and thought I was a brilliant environmentalist, not poor or lazy in the least. My son even went out to our blue bin pull boxes and my daughter helped cut them up. They liked the idea of each card being different for each different rock. My only issue was that now some of the Silver Lake moms are going to know that my kids eat Honey Nut Cheerios and frozen pizza, but whatever. 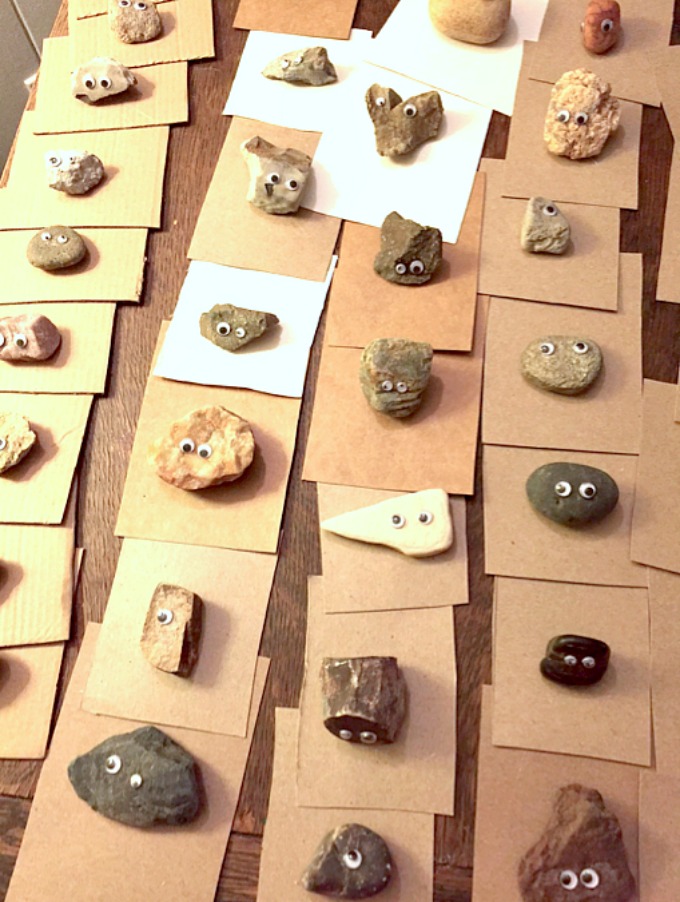 Next I hot glued the rock to the cardboard. That way it will stay for now but can easily be pulled off later to keep as a pet forever. I did this step because again, no need for urgent care, but older kids who can be trusted with glue guns could totally do this on their own.

When I went to JoAnn’s I looked for stamp that said “You Rock” but they didn’t have one. I didn’t want to print “You Rock” on paper, because that started to defeat the eco-ness of the project and I didn’t want to argue with the kids about writing the cute catch-phrase 64 times. Once I glued the rock on the cardboard I realized they could just write “U” above it with the rock under. My daughter added an exclamation point with a heart on the bottom for added effect. Easy peasy. 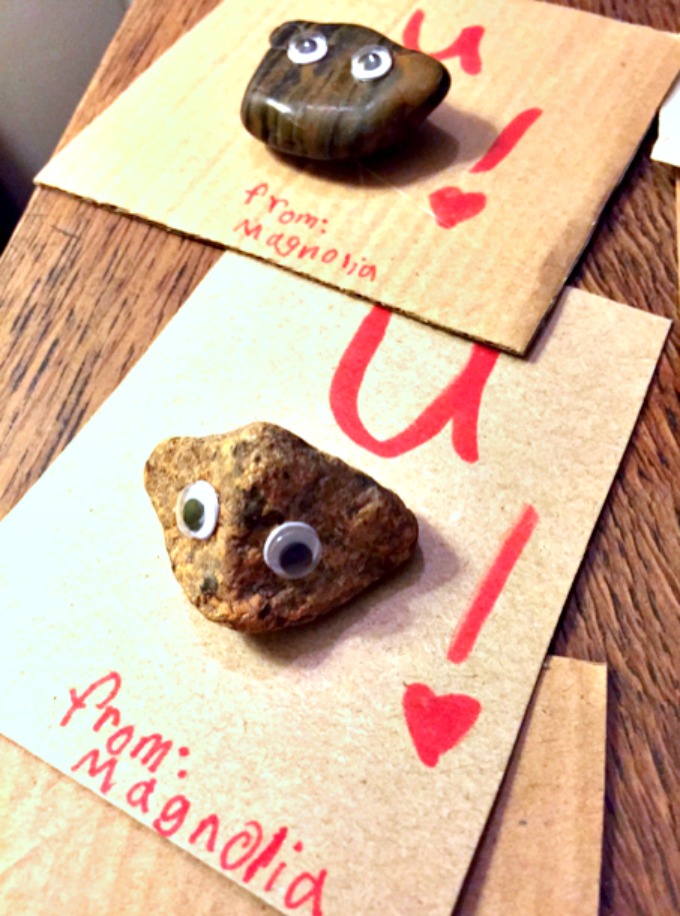 So now we have 64 pet rocks and they are so fricking cute that I kind of want to keep them all. But we won’t. I will, however, be adding googly eyes and crazy glue to my camping kit so that whenever we are out in nature the kids can make some brand new eco-friendly friends. And I won’t be worried that my kids don’t have the coolest Valentines in town. 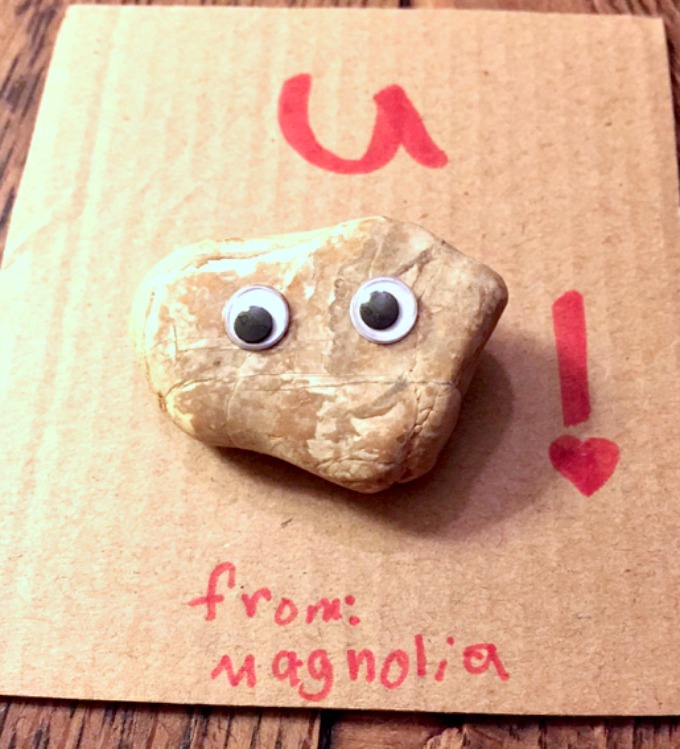 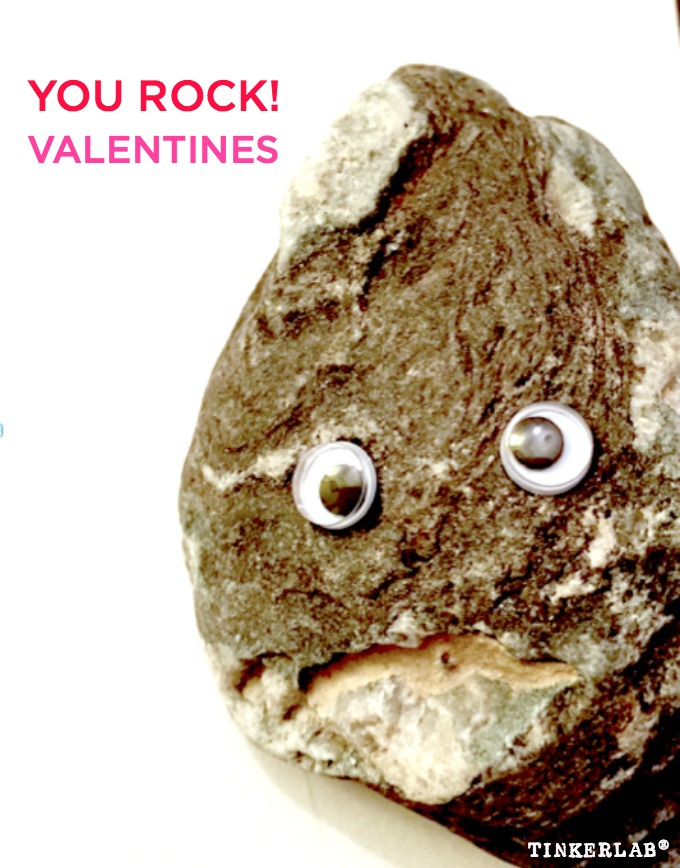 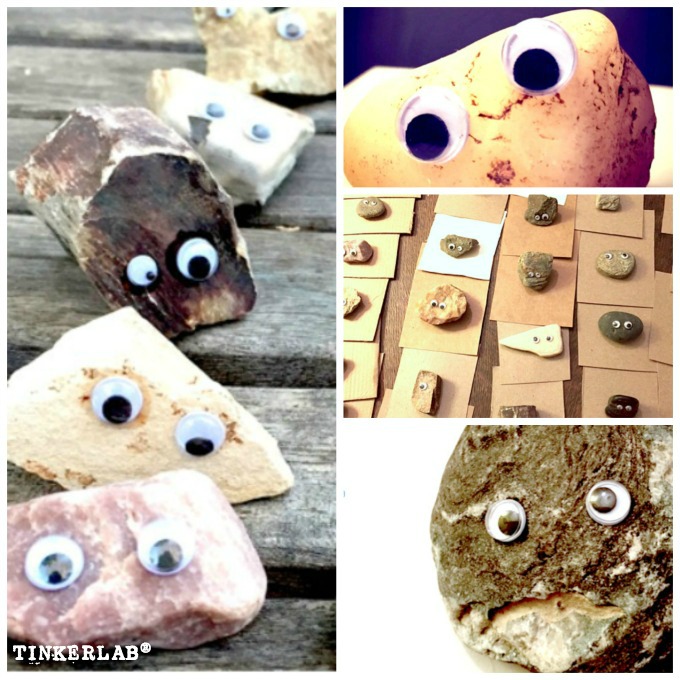 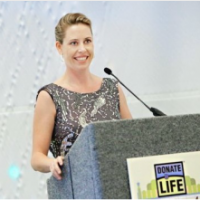 To learn more about Tenaya, you can find her at Tenaya Speaks.