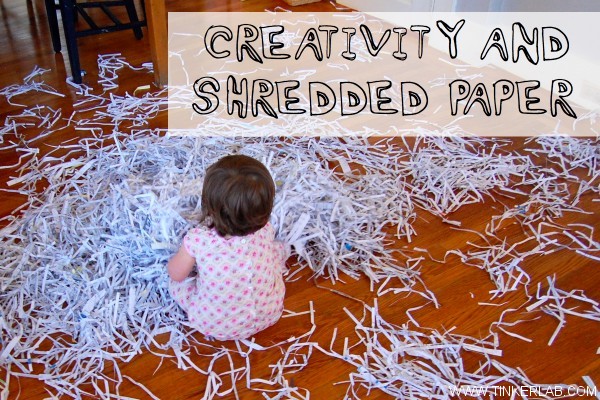 If you’re afraid of a mess, I have to warn you up front that this is a messy one.

But it’s not a dirty kind of mess and if you stick with me here, you might become a shredded paper convert like me. 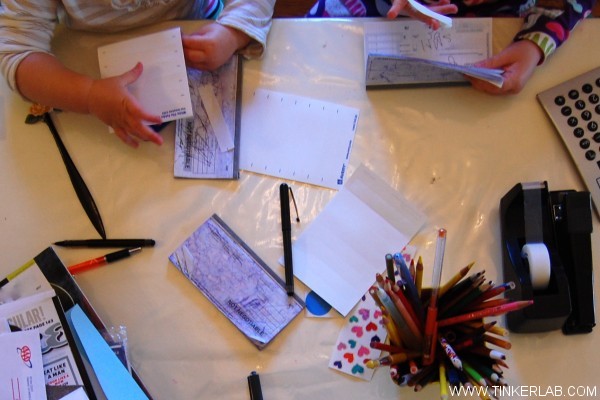 It all started innocently, and rather boring, enough. It was a bill-paying day, and I set the kids up with their own stack of mailing labels stickers, pens, and old checkbooks while I dealt with the heavy stuff.

They were happy enough, but things heated up when we moved on to paper shredding… 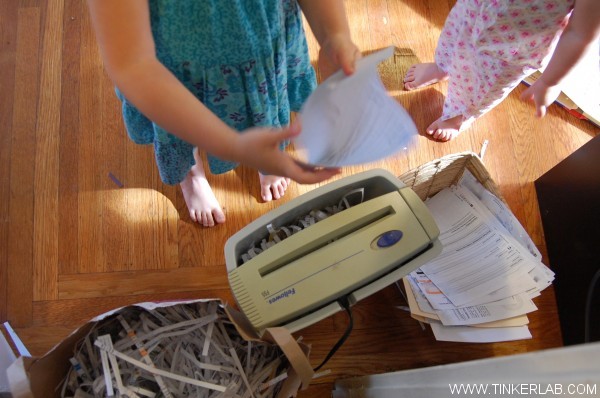 I had basket full of old bills that were ready for the shredder, and two happy-to-please assistants who took the shredding job very seriously.

Shredders are potentially dangerous, and I would absolutely not let my kids shred on their own, but with careful supervision the act of shredding can build confidence, teaches accuracy and careful attention to details, and it’s just plain fun to make a loud ruckus.

When it’s not in use, I unplug the machine and lock it in a closet. When it’s in use, I run through the rules of good shredder usage with my three and a half year old: Up to 3 sheets at a time. Hold the paper at the top when you feed it in (no fingers near the shredding area). And it’s not for my 18 month old.

While my three year old shreds, her sister hands her stacks of paper. They love it.

Okay, so take a look at that little basket of paper up there and remember how small it appears. And remember that appearances can be deceiving.

My friend and her son came over a couple hours later to play and make some ice cream. While we were talking, my 18 month old dug her hands deep into the neatly packed shredded paper bag, and in moments the room erupted into this happy play scene… 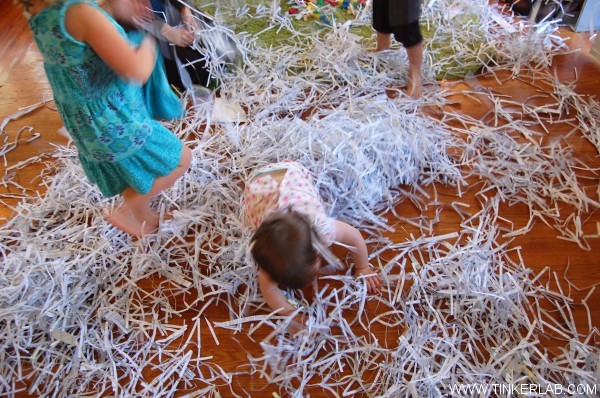 And that’s only half of the paper.

They could not have been happier. In fact, just before this moment, the kids were all winding down and ready to go their separate ways. But as soon as that bag emptied out, they found a whole other hour of play inside their little souls.

It was so fun, in fact, that my older daughter chose to keep playing rather than go to her beloved gymnastics class. 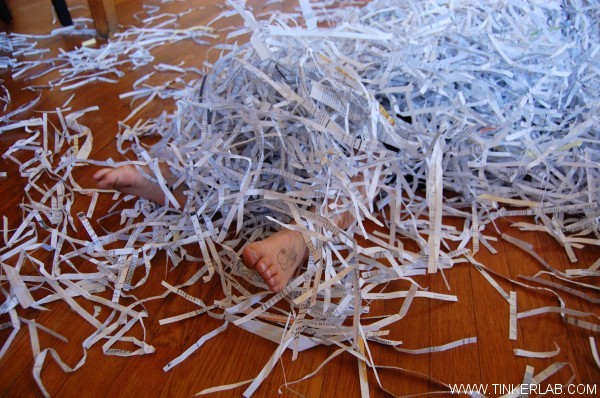 My friend is a master at imaginative play with kids, and had them bury themselves in shredded paper, pretend they were dormant volcano monsters, and then erupt without any notice. You can probably imagine the shrieking and laughter that followed.

And we all agreed that this is the perfect toy: free, open-ended, and entertaining for a long spell.

So it was messy, yes, but it was easy enough to sweep up. And rather than cart it off to the recycling bin like I had planned, it all found its way back into the closet and ready for another day of fun.

10+ Ideas on what you can do with Shredded Paper (like make animal bedding, papier mache, and mulch) from Bohemian Revolution.

Adorable and seasonal Shredded Paper Seed Starters from Made. These are on my to-do list.

Can you think of a time that your kid/s turned a banal situation into a burst of play? Have you played with shredded paper? Would you try this yourself?