How to Make Fake Snow

We’ve been making fake snow, which is equally fun for kids like mine who celebrate winter under a sea of palm trees or those who are house-bound by piles of real winter snow. 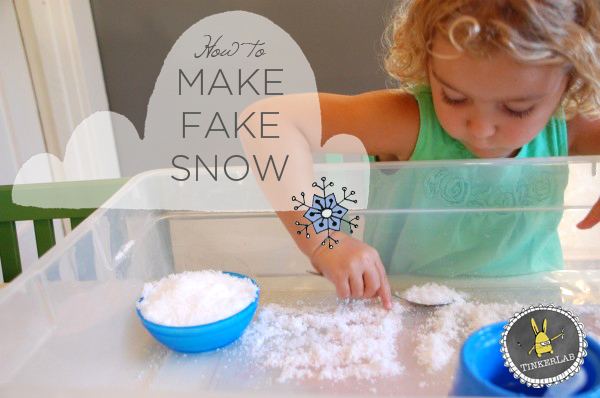 Note: This post contains Amazon links for your convenience. 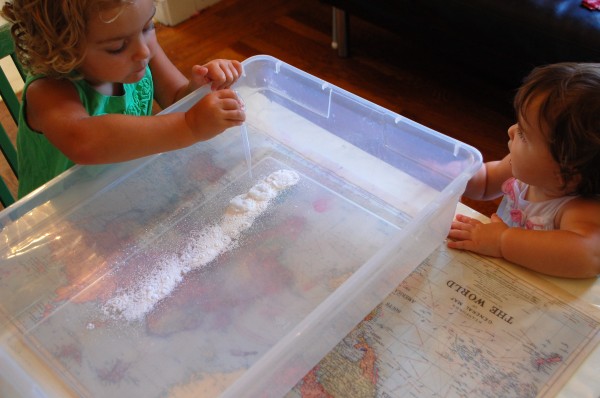 How we did it

We started by pouring a small amount of sodium polyacrylate, or fake snow  into a large tub. This material used to make fake snow is non-toxic (although you wouldn’t want to eat it), and you’ll recognize it as the same stuff used to absorb liquid in disposable diapers. I picked up a small bag of “snow” at RAFT, but I’m curious about pulling apart a diaper to mine this fun-to-play-with polymer. If you try this, let me know!

I almost always fall into the camp of “you can always add more,” so we started with just a little bit. When I bought the fake snow, the woman working there joked about a desire to fool her parents by pouring the powder all over their lawn in the middle summer, only to be greeted by a sea of snow once their sprinklers went off. This vision sat firmly in my mind, so I poured gingerly, not knowing just how much the powder would expand. 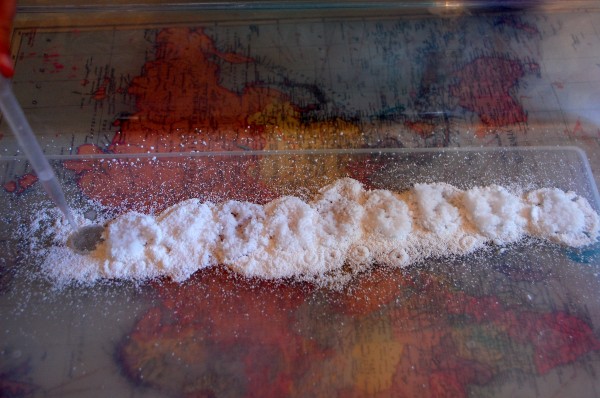 It turns out that it does in fact expand, but nothing to worry yourself about! 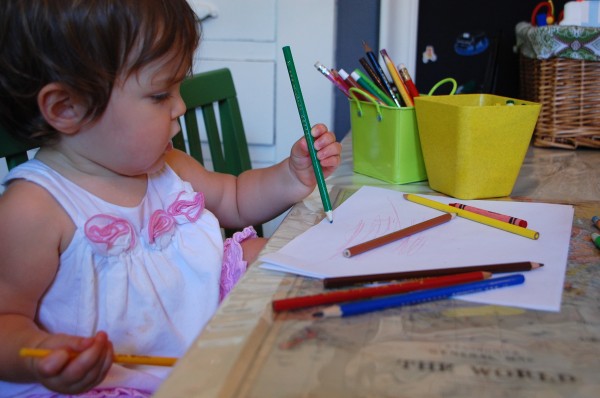 My one-year old was too little for this activity, and I was happy to situate little sister with an activity of her own. She was happy. 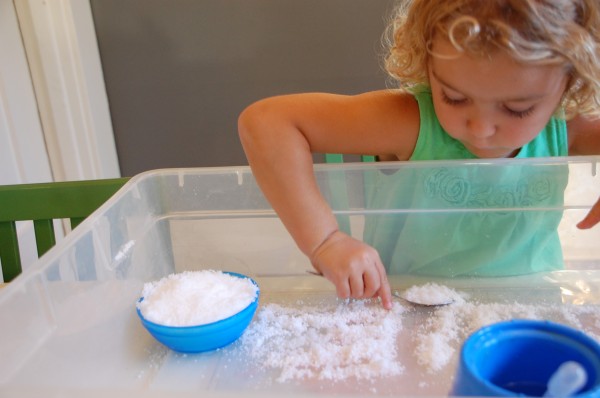 A request came in for a spoon and a bowl to fill. The project is expanding! I asked N to describe the texture for me, and she said it was cool and wet. I agree. 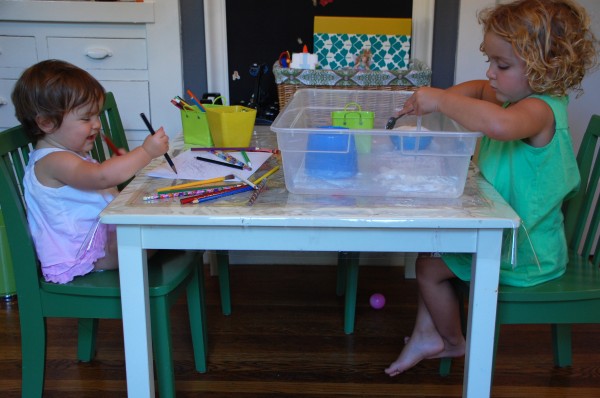 Working side-by-side, I now live for moments like this.

Mix colors into your fake snow 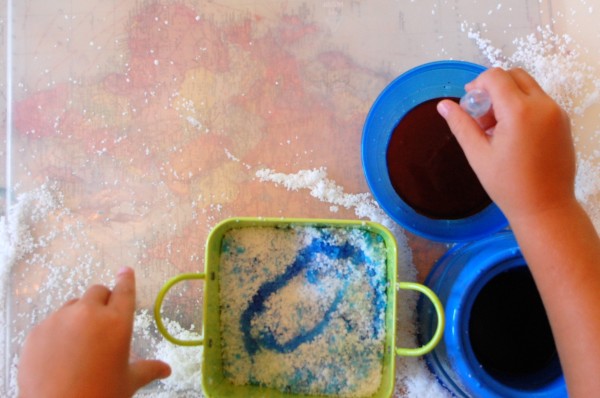 When playing with white snow seemed to run its course, I introduced Liquid Watercolors and a plastic pipette

. I limited N to two colors (mostly to keep the crazy factor down) and she requested blue and magenta. 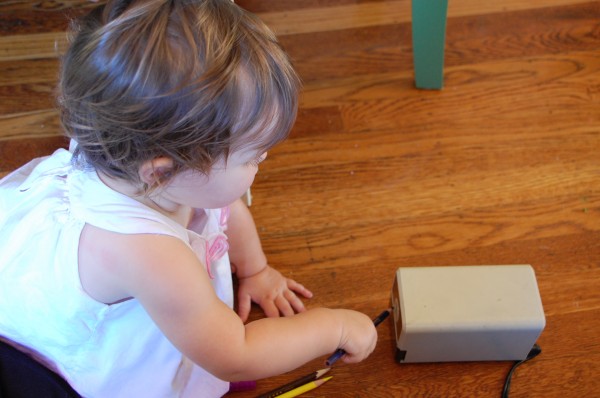 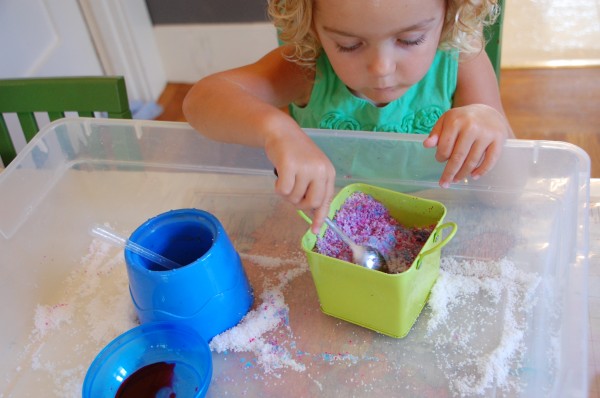 This turned into a cool color mixing experiment. It was fascinating to see how many of the “snow” pellets absorbed one color or the other, and cast an illusion of purple when viewed at once.

Make Fake Snow with a Friend 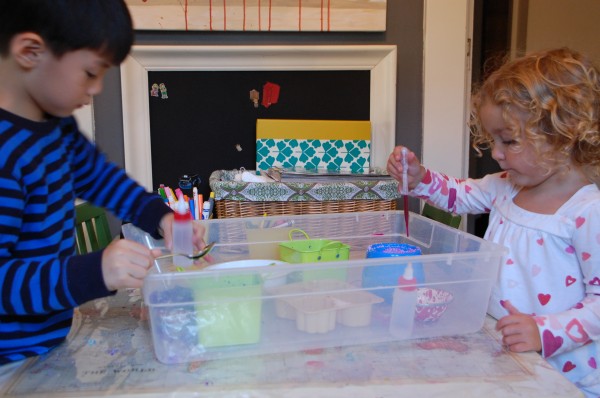 The next day our neighbor, J, came over for another snow-making session. J likes a good experiment as much as my daughter does, and the two of them scooped, squeezed, stirred, mixxed and poured until they had to be pulled away for dinner!

What do you think? Will you try to make fake snow? 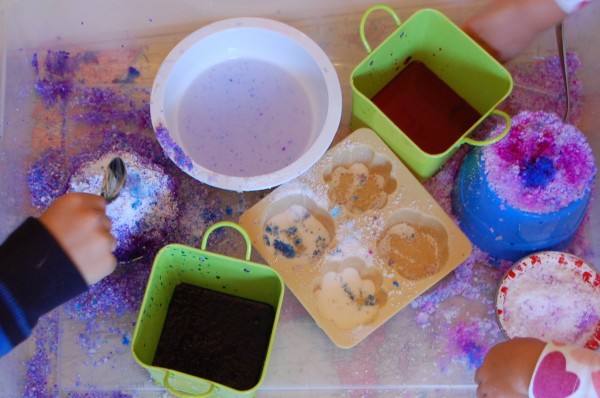 Note: Use your best judgement and due diligence when using these materials with young children. 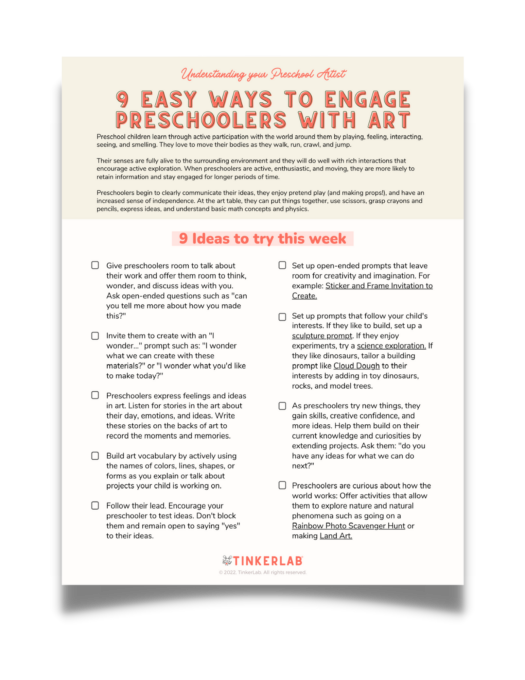